John Bradford, a zookeeper and supervisor, was killed “in the elephant barn” at Dickerson Park Zoo in Springfield, Missouri, this morning.

Police confirmed to local new outlet KOLR10 News, that the incident that left one dead near the zoo’s Gate 2 entrance, occurred when an elephant charged Bradford.

Emergency responders were called around 9 a.m., and two ambulances were seen leaving at around 9:30 a.m. Bradford worked at the Dickerson Park zoo for over 25 years. Police said that Bradford had no immediate family in the area but a brother has been notified.

The zoo prides itself on its elephants and recently mourned the passing of “Connie” also known affectionately as “Pinky,” the elephant matriarch of the zoo. Connie was around 50 years old and suffered recently from declining health until her death on October 5. The zoo still has two female and two male elephants. 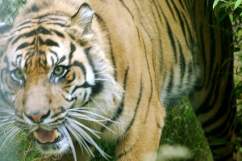 Tiger Attack at Oklahoma Zoo May Leave Employee Without Arm