Joseph “Joey” Patterson, 27, has been charged with the vicious assault of the two-year-old son of Minnesota Vikings’ star Adrian Peterson in Sioux Falls, South Dakota on October 9, reports The Argus-Leader.

The hideous attack happened in the boy’s home, where he was alone with Patterson on October 9. After early erroneous reports that cited Adrian Peterson JR as the identity of the injured boy, it’s since been revealed that the toddler was a secret lovechild between Peterson and a South Dakota woman named Ashley Ann Doohen.

At 5:27 p.m. on October 11, it was reported that child had succumbed to his injuries and tragically died.

1. He’d Just Moved Into the Home With the Child

Patterson was the only person home with the boy when the injuries occurred on October 9. He’s charged with aggravated assault and aggravated battery on an infant. It’s reported that he had just moved into a home with the child and his mother, at 6201 South Connie Avnue in Sioux Falls (above). “It’s a new relationship,” a family friend told The Argus Leader. 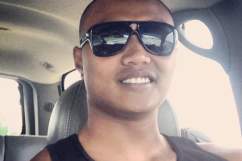 Alleged Killer of Adrian Peterson’s Son Is Out of Prison

Patterson could face up to 40 years in prison if convicted. The injuries suffered by Adrian Peterson’s son are consistent with child abuse, according South Dakota police spokesman, Sam Clemens.

It was reported that Peterson’s child would be taken off life-support on October 11, with his organs donated, reports USA Today. The infant has not had any brain activity since October 9, reports The Daily News.

Minneapolis City Pages reports that the mother had originally been told that her son had choked on candy, further examination showed the little boy had been violently shaken and choked.

2. Peterson Only Found Out He Was the Boy’s Father Recently

It only came to light that Peterson had another child when he was absent from Vikings’ training and spotted in Sioux Falls, South Dakota on October 10. Minneapolis City Pages reports that the toddler’s mother did not who the boy’s father was “until just recently.” The paper reports that Peterson underwent a paternity test and proved that he was the infant’s father.

During the ensuing media circus, Peterson’s father, Nelson, confirmed that the boy in intensive care was his grandson, but was not Adrian Peterson JR. After Friday’s practice, Adrian Peterson has said that he will play in the Sunday’s game between the Vikings and the Carolina Panthers in Minneapolis.

I really appreciate all the support that I’ve been receiving from fans, the Vikings organization. This is a private matter and I would ask you all to please just respect my privacy and not ask at all about the situation at hand. Thanks. Football is something I will always fall back on. It gets me through tough times. Just being around the guys in here, that’s what I need.

The Minneapolis City Pages reports that the child was a “secret.” A source told the paper that the mother of the boy had a casual relationship with Peterson when she lived in Minneapolis. The relationship ended when the woman moved to South Dakota.

Just talked to Nelson Peterson, Adrian's father. It is one of Adrian's sons but not Adrian Jr. "We are asking for http://t.co/eGJ7IxLLGU

During a previous relationship, Patterson spanked his girlfriend’s 3-year-old so hard, “he needed ice for welts on his buttocks,” reports The Argus Leader. The boy’s mother added: “He has threaten (sic) to kill me multiple times.” The woman took out multiple restraining orders against Patterson.

He has a long rap sheet.CBS South Dakota reports:

Court documents reveal the 27 year old has been arrested multiple times on various charges. He was arrested in 2004 for violating a protection order, but that was later dropped by the prosecutor. A 2012 arrest for aggravated assault was also dismissed by a prosecutor. Patterson has served time in jail for Eluding officers in 2010. He was also sentenced to five days in jail after pleading guilty to simple assault last year.

The 2012 assault Patterson was against the mother of his son. He underwent court-ordered anger-management training. It’s reported that Patterson went to high-school with the woman he’s accused of harassing in 2004. 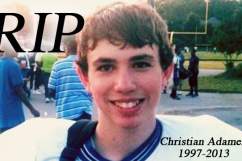 4. Patterson Has Another Kid

His Facebook page is dominated by images of Patterson with a son from a previous relationship in Sioux Falls, South Dakota. In one Facebook post he refers to his son, Porter, as “#mylife.” On February 11, he wrote:

Porter brought so much happiness to my life! I couldnt imagine it without him.

5. Patterson Works as a Coffee Salesman

Patterson’s Facebook page lists his profession as an independent distributor of Organo Gold coffee, in addition to working in construction. He’s a graduate of Southwest Tech University in South Dakota.