Reports are coming in that Lou Reed, famed songwriter of such hits as Walk on the Wildside and Perfect Day, has passed away at the age of 71. Here’s what you need to know.

1. No Word of Cause of Death

There is no official cause of death, but speculations surround issues with his liver. Reed had a liver transplant earlier this year.

2. He Was Born in Brooklyn

3. He Was a Founding Member of The Velvet Underground

After attending Syracuse University, Reed moved to New York City and, after meeting John Cale while working in a record shop, founded The Velvet Underground in 1964.

4. He Partied With Andy Warhol & Nico

5. He is a Grammy Winner

Reed won Grammy awards and was a famed singer-songwriter. 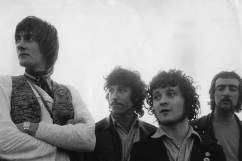 Loading more stories
wpDiscuz
0
0
Would love your thoughts, please comment.x
()
x
| Reply
His hits include "Walk on the Wild Side" & "Perfect Day."