In President Obama’s address this afternoon, he took the opportunity to discuss the benefits and initial popularity of the “Obamacare” initiative, which begins today.

The president explained that the Healthcare.gov website, the online location for applying for the affordable care act, received over 1 million hits before the application form opened at 7 a.m. this morning. According to him, this is more than the Medicare website has ever had on it at one time.

"As long as I'm president," says Mr Obama, I'll not give in to "reckless demands" to deny health insurance to hard working Americans.

#Obama: "The irony is that they have shut down the government but the Affordable Health Act is open for business" 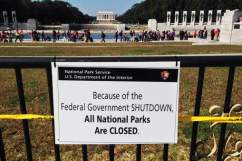 The President acknowledged the website is having some growing pains, but assured the public that those glitches with be dealt with shortly. For many users, the overwhelming popularity of the act has caused the site in their specific state not to work.

@BarackObama Help! I just went to http://t.co/ti56Yn4WuZ but it is not working.

Obama acknowledges glitches on Obamacare website "because more than 1 million people visited http://t.co/oSlogbvX7h before 7:00AM"

President Obama: I will not give in to reckless demands by some in the Republican Party to deny health insurance.

The U.S. Commander-in-Chief also took the opportunity this afternoon to blame a small faction within the Republican party for causing this shutdown because they refuse to pay their bills.

Obama: You don't save money by refusing to pay car bills, "you're just a deadbeat."

Obama: "I will not negotiate over Congress's repsonsibility to pay bills it's already racked up."

Obama: To Congress, my basic message is this: Pass a budget and end the government shutdown. Pay your bills.

Obama to Congress: "Pass a budget. End government shutdown. Pay your bills. Don't put our economy or our people through this any longer."