Thank God for government shutdown! “Righteousness exalteth a nation: but sin is a reproach to any people.” (Pr.14:34) pic.twitter.com/wbsBIemW1f

There’s no issue safe from the monsters at the Westboro Baptist Church out of Topeka, Kansas, including hot-potato politics. The “church” members think God has intervened to allow for the government shutdown and that the reason he does so is because homosexuals are allowed in the military, or something.

They’ve also announced plans to picket the Department of Defense to further solidify their anti-government stance.

Westboro, which has made its name in protesting the funerals of victims of tragedies — somehow relating the deaths to acceptance of homosexuality in society — has proven time and again that no tragedy or misfortune is safe from the group’s vile opinions. 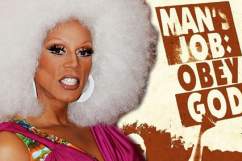