A gunman, who has been identified as a former police officer named Tom Piccard, terrified pedestrians in downtown Wheeling, West Virginia when he opened fire on the federal courthouse in the town at around 2:45 p.m. local time, reports WTRF.

1. The Gunman Has Been Shot Dead

The gunman was shot by US Marshals who were returning fire on the man. 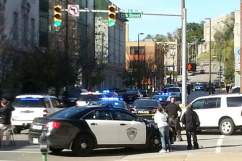 2. There is no Confirmation of the Number of Injuries

Security officer injured in W. Va. federal courthouse shooting only funded to be paid through Oct. 17, Marshals tell me.

A security is reported to have been injured during the shooting, it’s reported the guard was hurt by falling glass, reports The Associated Press.

WTRF reports that three people (possibly including the security guard) were admitted to Wheeling Hospital with injuries relating to the incident.

3. The Shooter is a Former Wheeling Police Officer

Federal prosecutors have confirmed to our news partner WVMetronews that the shooter is a former Wheeling police officer.

The Associated Press have reported that police are still trying to figure out a motive.

4. He ‘Peppered’ Building with Bullets

Many police still on scene in #wheeling after shooting in front of federal building pic.twitter.com/slfOgq2FWd

The Intelligencer reports that the man was also targetting a nearby YWCA, as well as the federal building.

5. The Shooter Used an Assault Rifle

The man was armed with an assault rifle. He reloaded his weapon at least once during the shooting.

Read More
5 Fast Facts, Breaking News, Guns, Shooting
An ex-cop gunman shot at the federal courthouse in Wheeling, West Virginia, before US Marshals returned fire on the man, killing him