Rupert Murdoch definitely got a text about this.

For some people, the Fox News homepage is appearing hacked. Apparently, some people can’t see it, but for anyone wondering, this is the very minor, but still pretty funny damage that someone has inflicted on Rupert Murdoch et al.

As you may have seen, http://t.co/m6O9czWONs is having issues. It's an internal production problem and will be fixed soon. #FoxNews

Apparently, someone who has probably at least shaken hands with Bill O’ Reilly made a boo-boo. Or maybe it’s those new giant iPads (with less pixels than an iPad!) that are causing issues. 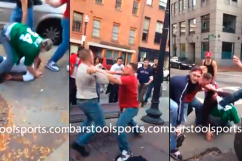