A horrifying scene unfolded at the Westfield Garden State Plaza Mall in Paramus, New Jersey on Monday night as witnesses reported a gunman on the rampage, according to CBS New York.

Reports from the scene came thick and fast as authorities tried to secure the scene, eventually Paramus Mayor Richard LaBarbiera only confirming that one shell casing had been recovered in the aftermath of the horror. This is despite witness claims of multiple gunshots.

The scene was no longer considered an active shooter situation as of 11:30 p.m.

On scene at Garden State Plaza. Police say an active shooter is inside. pic.twitter.com/SlQcDoBC0q

Shots rang out in the mall at before the mall’s closing time at 9:30 p.m. One witness described hearing what she thought were “firecrackers” just after 9 p.m. 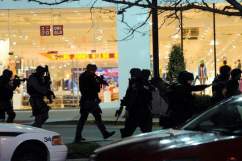 Garden State Plaza Mall Shooting: All the Pics You Need to See

MyFoxNY #SkyFox says black line of cars that just showed up to Garden State Plaza #Mall may be #FBI pic.twitter.com/50nj6xeunU

At 10:30 p.m. a SWAT team had stormed the mall. A massive police response is underway at the mall with one report saying that a police cruiser crashed outside the Nordstrom’s dept store entrance to the mall. At 11:30 p.m. the situation showed hundreds of police surrounding the mall, walking calmly throughout:

News 12 reports that police, along with K-9 units, were going store-to-store to search for the suspect, despite reports that he had fled the area of the mall.

3. We Don’t Know of Any Casualties Yet

Daughter of Fernando Perez locked down in store inside #GardenStatePlaza; she texted him this pic: pic.twitter.com/BaLEtUAvvb

There are no confirmed reports of injuries or wounded. The mall was quickly evacuated with security telling patrons to run “or they would die.” NJ.com reports that stores in the mall turned off their lights and employees began to hunker down. Paramus Mayor Richard LaBarbiera told WCBS reporter Jessica Schneider that there were no reports of injuries. Though earlier she tweeted:

Chills as these people are recounting what they saw and heard. They say at least 2 shooters in full body armor; saw at least 2 injured.

A shooter reportedly has full body armor, helmet and an assault rifle. Witnesses said that he appeared to be shooting “randomly” throughout the mall. One man, Andre Munoz, told NJ.com:

It was very surreal, I couldn’t believe it. I was almost in disbelief.

5. One Witness Claims She Saw 2 Gunmen

There may be multiple gunmen. One witness to the carnage told CBS New York:

There was two people in armored suits with AK-47s just going around shooting people randomly.

Garden State Plaza Mall Shooting: All the Pics You Need to See