A chilling and spooky “apology” video has been released by the North Korean press agency of Merrill Newman, the California man who has been held captive in Pyongyang, reports The Associated Press.

The video has been dated November 9. The AP notes that the North Korean government have previously been found to have coerced “apologies” and “confessions” from prisoners. 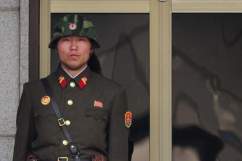 The following is an apology U.S. citizen Merrill Newman presented to a relevant institution after his detention in the DPRK:

I am Merrill Newman living in California, USA.

During the Korean War, I have been guilty of a long list of indelible crimes against DPRK government and Korean people as advisor of the Kuwol Unit of the UN Korea 6th Partisan Regiment part of the Intelligence Bureau of the Far East Command.

As I gave 300 people with barbarity gone to the South who had ill feelings toward the DPRK from Chodo military education and guerilla training they later did attack against the DPRK although the armistice was signed.

I also gave 200 soldiers under my command in Mt. Kuwol the task to harass the rear base such as collecting information on the movement and the arm equipment in KPA, attacking and destruction on the communication system, the rice storage, railroad and munitions train by dispatching the several elements to Hwanghae Province Area.

According to my order they collected information of the KPA and attacked the communication system and killed 3 innocent operators, delayed the munitions supply using explosives obtained from attacking the mine and they attacked the KPA and harassing operations of the rear base 10 times in the Hwanghae Province Area.

As I killed so many civilians and KPA soldiers and destroyed strategic objects in the DPRK during the Korean War, I committed indelible offensive acts against the DPRK government and Korean people.

If I had the opportunity to visit Kuwol Mt. I was going to pray for the souls of dead soldiers. If I saw surviving soldiers in Mt. Kuwol, I was going to connect them with the members of the Kuwol Partisan Comrades-in-Arms Association which I had already connected with, anti-Communist strategic plot organization.

All the members of the Kuwol Partisan Comrades-in-Arms Association escaped from the DPRK to South Korea. So I asked the guide to help me to look for their families and relatives living in DPRK and I gave the document written with their address and e-mail address to the guide in the Yanggakdo Hotel.

I also brought the e-book criticizing the Socialist DPRK on this trip and criticizing DPRK.

Although I committed the indelible offensive acts against the Korean people in the period of the Korean War, I have been guilty of big crimes against the DPRK government and Korean People again.

I will never commit the offensive act against the DPRK Government and the Korean People again.
On this trip I can understand that in US and western countries there is misleading information and propaganda about DPRK.

If I go back to USA, I will tell the true features of the DPRK and the life the Korean people are leading.