An 85-year-old veteran of the Korean War, Merrill Newman, has been arrested and detained in North Korea, reports The San Jose Mercury News. Newman had entered the country legally on a tourist visa and was all set to leave on October 26 when he was apprehended by North Korean authorities.

1. Newman Was Travelling With a Chinese Tour Group

Newman was in North Korea as a tourist. He had signed up for a visit to the secretive nation through a Beijing-based tour company. Newman was supposed to return home on October 26 but as he sat on the plane, ready to leave, authorities removed and detained him.

2. The U.S. Govt Have Not Acknowledged His Capture

The U.S. State Department have not acknowledged his detainment or the fact that he has yet to return home. Washington has not diplomatic relations with the Pyongyang. The state-run media outlet have made no reference to Newman’s arrest. A spokesperson for the U.S. Embassy in Beijing told The New York Times:

We are aware of reports that a U.S. citizen was detained in North Korea, but we have no additional information to share at this time.

The U.S. Embassy in Beijing (Getty)

An unnamed source within the State Department told Mercury News:

We are aware of reports that a U.S. citizen was detained in North Korea, [Sweden] acts as our protecting power for issues involving U.S. citizens in North Korea. We are in regular, close coordination with representatives of the Embassy of Sweden.

#breaking State Dept: NKorea has confirmed it's holding an American, identity not confirmed Believed to be #paloalto retiree Merrill Newman

Daniel Sneider, of the Stanford University’s Walter H. Shorenstein Asia-Pacific Research Center, told NBC Bay Area, it’s “very unusual” that the North Koreans took so long to acknowledge that they’re detaining Newman. He thinks it means “they don’t know what to do with him.”

3. He’s Been Retired for Nearly 30 Years

During his working life, Newman reportedly worked as a financial exec for numerous tech companies, he retired in 1984. Though UPI reports that he worked as a high school teacher.

In 2005, he was honored for this 60 years volunteering for the Red Cross. 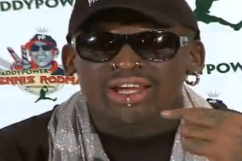 4. He Served as an Officer in the Korean War

An American soldier sleeps on his ammunition in the Mason area during the Korean war. (Getty)

He joined the military in 1950, just at the start of the Korean War. He had just graduated UC-Berkeley with a BA in zoology. During the three-year-long war he served as an infantry officer. When one resident of Channing House told The Mercury News about speaking with Newman just prior to his departure:

I said ‘why do you want to go to a place that’s dangerous, I wouldn’t want to go,'” she said. “His reaction was very relaxed, with a smile. He went just as a fun trip. He wasn’t there for any particular reason. They were travelling.

5. His Travelling Companion is Home Safe

The man travelling with Newman, Bob Hamrdla, did return safely from North Korea. The November 2013 edition of the Channing House newsletter reads:

Bob Hamrdla no sooner returned from Berlin than he packed up to visit North Korea with Merrill Newman.
Merrill took Korean language lessons to prepare for their ten-day independent trip. They will be accompanied at all times by two Korean guides. 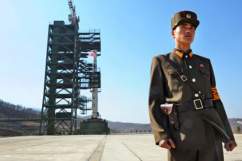