Police have arrested Todd LaDuke, 38, and Nicole Scalise, 32, of Holly Hill, Florida after police discovered they were sharing their home with a decomposing body, reports NewsDaytonaBeach.com.

On October 31, cops forced their way into the couple’s home in Holly Hill (above). Cops were tipped off by Community Families, a contractor with the Department of Children and Families in Florida. The group asked authorities to perform a wellness check on a disabled female at the house who had not been in contact for a month. Inside the home a “disgusting” scene was discovered, according to Holly Hill Police Chief, Mark Barker. 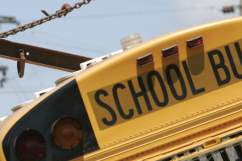 A Facebook profile we found for Scalise showed this picture of her and LaDuke with an unnamed child:

According to reports the couple had been using the dead woman’s Social Security and EBT benefits. The home was littered with feces and urine as well as showing evidence of drug use. Three children were found living in the house, ages 11, 6 and 4.

The deceased woman was just 33 years old, and her death is being treated as “suspicious.”

The couple are being held at Volusia Branch Jail, both charged with neglect of a child, unlawful disturbance of a body and uttering forged bills. In addition, LaDuke is charged with possession of an IV substance.