Pekin, Illinois is one of the many central Illinois towns to have been hit by today’s devastating tornado. The small middle class town of about 35,000 people is approximately 170 miles southwest of Chicago and right at the center of the path followed by today’s destructive weather systems.

Here’s what we know so far about the devastation in Pekin.

1. So Far, There Are No Reports of Serious Injuries

No reports of serious injuries in Pekin so far after tornado. #peoria pic.twitter.com/xNndbK72QV

According to local newspaper the Peoria Journal Star, the massive tornado, which only existed for about 10 minutes, made a giant sweep through Tazewell County with destruction hitting its peak in Pekin and Washington.

The storm touched down at around 10:55 a.m. local time and so far, no serious injuries or deaths have been recorded.

2. Some 20 Tornados Have Touched Down in Illinois Today

The midwest was warned early this morning of massive weather systems that could likely cause destructive tornados and thunder storms. So far, 21 tornadoes have been spotted touching down, 20 of which occurred in Illinois.

3. Pictures of the Destruction Are Emerging Online

A picture of the destruction caused by the tornado in Peoria, Illinois. (Twitter/@FRED ZWICKY)

For more images of the destruction that swept through central Illinois, look here:


4. People in the Area Have been Told to Shelter in Place

Residents of central Illinois, including the newscasters in the video above, were told to stop what they were doing this morning and seek shelter as the Tornado went by. Today’s Chicago Bears game against the Baltimore Ravens was briefly suspended in the middle of the first quarter due to the threat of bad weather. 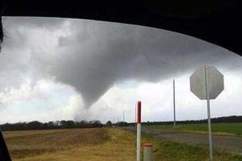 Tornadoes Terrorize the Midwest: The Videos You Need to See

5. Tornado Season for This Area Ended in June

Who would've ever thought this would happen in November. #Climatechange

Because tornado season in central Illinois, and for much of the Midwest, ends in June, many have taken to Twitter to blame climate change of these erratic weather conditions. 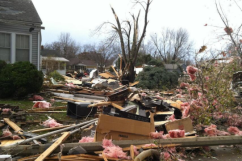 Read More
Breaking News, Illinois, Tornadoes, Weather
Follow Heavy ↓
Tornados are currently ripping through the midwest and central Illinois, but no place so far has been hit as badly as Perkin, Illinois.