In what is sure to cause a stir, legendary baseball writer Peter Gammons told ESPN’s Mike Lupica on Thursday November 21:

I wonder now, though, and I’ve had people in the Yankees say this to me. He wants to blow up the world. He’s like the marathon bombers. He’s just, this is, he’s going to get them.

The day before, on November 20, A-Rod created headlines when he stormed out of a arbitration hearing on November 20. Then the embattled Yankees star showed up on Mike Francesca’s show and told the world how innocent he was.

@dianagram @SI_ExtraMustard Stupidly worded comp of blowing up a process. He is owed, and gets my apology for mispeaking 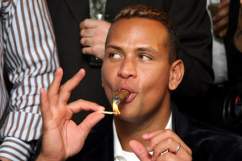