So it turns out that crack-smoking Toronto Mayor Rob Ford can sink to new lows. During a chamber meeting in Toronto today, he charged at a councilor, Pam McConnell, and grabbed her before being pulled away by his colleagues.

The mayor has been determined to hang on to his untenable position since his admission two weeks ago that he has used crack and bought illegal drugs. The meeting was held to discuss reducing his powers. 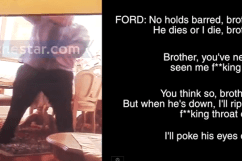