1. Thanksgivukkah Is the Overlapping of Hanukkah and Thanksgiving

thanksgivukkah at its finest #happyholidays pic.twitter.com/coa7UpFXoM

Thanksgivukkah is a holiday name portmanteau neologism given to the convergence of the American holiday of Thanksgiving and the first day of the Jewish holiday of Hanukkah on Thursday, November 28, 2013. It is the result of a rare coincidence between the lunisolar Hebrew calendar (whose dates reflect both the moon phase and the time of the solar year, and which can have between 353 and 385 days per year) and the Gregorian calendar. Because the calendars are not calculated the same way, Hanukkah appears at a different time each year on the Gregorian calendar.

So, basically, it’s when Hanukkah and Thanksgiving occur on the same day.

2. The Name Thanksgivukkah Is Actually Trademarked

The term “Thanksgivukkah” was trademarked by a Boston-area resident. A Facebook and Twitter page were each constructed to celebrate the name.

3. Thanksgivukkah Has Caused Some Controversy

Happy Thanksgivukkah! I'm off to change into my stretchy pants. Once in a lifetime, make it count! Gobble Tov! pic.twitter.com/wc3EET6Kf8

There has been some disagreement about the name: the Manischewitz company, the country’s top producer of kosher food, has spelled the dual-holiday with one fewer “k” towards the end, as “Thanksgivukah”;[12] and Israeli newspaper Haaretz posed the question: “Why ‘Thanksgivukkah’? Why not ‘Chanksgiving?'”. Haaretz points to a clip from The O.C., the source of the portmanteau “Chrismukkah”, as the basis of the “Thanksgivukkah” portmanteau.

A merging of celebration so unique, it only happens every 70,000 years. What's not to like? Happy #Thanksgivukkah! pic.twitter.com/ZhAIT92PP5

Thanksgivukkah is extremely rare as it only happens when the two holidays collide. In fact, because of the opposing calendars, Thanksgivukkah will not happen again for 75,000. Wired.com states:

This festive overlap is rarer than a planetary alignment, having occured just a couple times in history. And because of some strange calendar properties, this is basically the last Thanksgivukkah that will happen for more than 75,000 years. For humans, that’s an unfathomably long time.

5. A Creation Called the Menurkey Has Been Born

The Weinstein family does Thanksgivukkah right with a turkey menorahpic.twitter.com/Wd6lrfQSDJ

With the acknowledgement of Thanksgivukkah has come a new food item called “menurkey.” It’s basically a turkey with candles shoved in it to combine two holiday staples: the menorah from Hanukkah and the turkey from Thanksgiving. 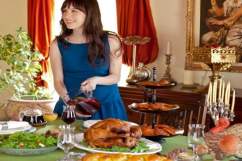 Loading more stories
wpDiscuz
0
0
Would love your thoughts, please comment.x
()
x
| Reply
Thanksgivukkah is what everyone's talking about right now. Check out these five facts that will tell you everything you need to know about the rare occasion.