Have you ever heard a large city mayor threaten to rip somebody’s throat out? Now you can say you have.

The Toronto Star has acquired a video of Toronto Mayor Rob Ford in the middle of an epic and explicit rant. Although the context of the death threats made in the video, as well as the identity of the person being discussed, are a mystery, the video still seems pretty damning.

Ford said that the video is “very embarrassing” but no made no comment past that. Ford is refusing to step down even after years of scandal finally culminated in this week’s admission that he had smoked crack in a drunken stupor. 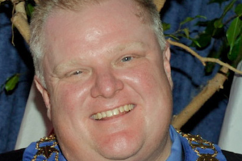 Read More
Breaking News, Canada, Rob Ford
This video contains the mayor of Toronto use explicit language and threatening to rip someone's throat and eyes out.