Four members of a Brooklyn based indie band named The Yellow Dogs were found dead of gunshots wounds in their Williamsburg apartment, reports The Daily News.

Another member of the group was found alive with a gunshot wound on his arm.

1. NYPD Suspect a Disgruntled Ex-Member Was the Gunman

The shooting happened shortly after midnight on Monday November 11. The gunman has tentatively been identified as Raefe Ahkhba, a former band-member. The Daily News reports that he was kicked out of the band for selling equipment, with The New York Post adding that he was also stealing from the band in 2012. 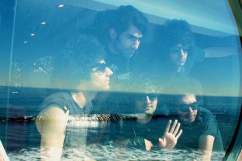 2. The Band Members Were Found Scattered Around the Building

Another man,Sasan Sadeghpourosko, was found alive with two gunshot wounds on his arm, he is not a member of the band. Police were called to the scene after witnesses reported seeing a man with a gun in the area. When cops entered the apartment building, they first encountered Soroush Farazmand (the band’s guitarist) on the second floor, dead of a gunshot wound to the chest. One floor up, police found Arash Farazmand (drummer) and Ali Eskandarian (singer) dead of gunshots to the head.

Two other people were found unharmed in a bathroom in the building. They said the gunman had shot at them but missed.

Cops believe the murderer took his own life on the roof of the band’s apartment building. He was found dead of a gunshot wound under his chin from his, Century Sporter, .308-caliber rifle.

4. The Band Are Originally From Iran

The band formed in 2006 in Tehran, Iran before relocating to Brooklyn. The horror occurred on Maujer Street in East Williamsburg, Brooklyn, shown here:

Their last album, Upper Class Complexity, was released in 2012.

this is bad news "@NewYorker: How Silk Road, the eBay of illegal drugs, came undone: http://t.co/cp3C6v7Kh0"

5. The Band Were Featured in 2009 CNN Documentary

According to their Facebook page, the band cites The Talking Heads and The Clash as some of their influences. In 2009, the band were featured in a CNN documentary (below) on the indie music scene in Tehran as well as being featured in movie on the subject, No One Knows About the Persian Cats.

the yellow dogs CNN interview ( inside the middle east )see yellowdogs and freekeys on CNN and underground rock scene in iran and you can check their other tracks on http://www.myspace.com/theyellowdogsband2009-04-10T22:57:57.000Z

Read More
5 Fast Facts, Breaking News, Murder, Suicide
It's believed the band were murdered by a former member of the group.