You can disapprove of Bashir's single remark and still acknowledge his talent.

So less than 24 hours after Martin Bashir announced his resignation from MSNBC over the Sarah Palin/S*hit-in-her-mouth scandal, MSNBC’s other ex-employee, Alec Baldwin has said he disapproves. 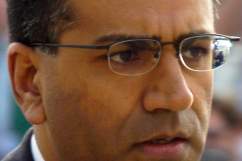 But the not-homophobic 30 Rock star also acknowledges Bashir’s “talent.” Perhaps he’s talking about the talent Bashir showed during his 2003 documentary Michael Jackson where he simultaneously pretended to be a journalist while really being a sycophant to Jacko.

I wish @MartinBashir the best of luck. Some of these cable venues really are Off-Off Television.

I'm sorry to learn that @MartinBashir is out at MSNBC

Broadcasters on certain networks are called upon to offer analysis of events and public policy, day in, day out

Unlike Bashir, Baldwin was ceremoniously fired from his short-lived MSNBC show, Up Late With Alec Baldwin, after he allegedly called a photographer a “c*cksucking f*g.”