Austin Dillon will drive the famed No. 3 car – the former number of NASCAR legend Dale Earnhardt – in the Sprint Cup Series next season, ESPN reported on Wednesday.

1. Dillon Has Quite the Racing Pedigree

Austin Dillon is the grandson of Richard Childress, who owned Dale Earnhardt’s cars for the majority of his career. Dillon’s younger brother Ty races for Richard Childress Racing in the Nationwide Series.

Dillon will team up with crew chief Gil Martin, who led Kevin Harvick to six appearances in the Sprint Cup Chase.

4. No. 3 Car Hasn’t Been Used in Since Earnhardt’s Death

Dale Earnhardt used the No. 3 car to win six championships until his tragic death in 2001. The number hasn’t been used since then. Childress told FOX Sports that he believers Earnhardt would have approved of the decision to bring the number out of retirement.

Watch the video above to see Dillon unveil the No. 3 car.

5. Reaction Mostly Positive Following Decision to Bring Back No. 3 Car

Childress told USA Today the fan reaction has been mostly positive in regards to the decision to bring the No. 3 car out of retirement.

For every five (negative) calls, we get 95 positive,” Childress said. “What we’re hoping to do is win those over with the class we’re going to bring the 3 back with. 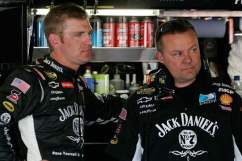 Read More
NASCAR, Racing
Follow Heavy ↓
Austin Dillon will drive the No. 3 car in the Sprint Cup Series next season.