From gravity-defying dunks to improbable upsets, the sporting world has made us cheer, cry, cringe and gaze on in amazement this year.

Here are the 20 most memorable moments — in chronological order — from the field, court, pitch and rink in 2013:

Clowney not only hit Smith with enough force to knock his helmet off, but also recovered the fumble for the Gamecocks, who went on to win 33-28.

Denver, January 12: Facing a seven-point deficit with 44 seconds remaining, no timeouts and the ball on their own 30-yard line, things looked grim for the Baltimore Ravens in the 2013 AFC Divisional playoffs.

Then the impossible happened. Ravens receiver Jacoby Jones inexplicably got behind the Broncos defense and hauled in a 70-yard touchdown pass from Joe Flacco, forcing overtime at Mile High. The Ravens prevailed 38-35 in overtime to complete one of the most epic comebacks in NFL history.

Despite a furious rally from the 49ers, the Ravens ultimately held on to win 34-31.

Black out at Super Bowl XLVII leaves players in the darkThe Super Bowl was interrupted by a power outage on Sunday, plunging parts of the Superdome into darkness and leading to a 34-minute delay in the biggest sporting event in United States.2013-02-04T17:03:43.000Z

Los Angeles, March 10: DeAndre Jordan threw down this thunderous alley-oop slam over Brandon Knight during a game between the Clippers and Pistons in March. The epic slam — a shoe-in for dunk of the year — quickly became the object of T-shirts, memes and viral videos – much to the chagrin of Knight.

Philadelphia, March 22: Florida Gulf Coast busted quite a few brackets in March. Andy Enfield’s team shocked the world by toppling Georgetown 78-68 in the second round of the NCAA tournament, becoming the seventh 15-seed to defeat a No. 2. The Eagles went on to become the first No. 15 in history to make the Sweet 16 by notching a 10-point win over San Diego State in the next round.

Arlington, March 29: Michigan point guard Trey Burke drilled this improbable three-point buzzer beater to force overtime against Kansas. The Wolverines finished off the Jayhawks in the extra period to advance to the Elite 8.

John Beilein’s team went all the way to the national championship game, but ultimately came up short against Louisville.

Indianapolis, March 31: With the world watching, Louisville guard Kevin Ware suffered one of the most gruesome injuries you’ll ever see during a sporting event. However, his teammates used the injury as a rallying point during the Cardinals’ run to their third NCAA championship.

Boston, May 13: The Boston Bruins made history by erasing a three-goal third period deficit against the Toronto Maple Leafs in Game 7 of the Eastern Conference Quarterfinals. Trailing 4-1 with 14 minutes remaining in the final frame, the Bruins scored three straight goals — including two in the final minute — to force overtime. Centerman Patrice Bergeron scored the game-tying goal and game-winning overtime goal to give the Bruins a 5-4 win and berth in the Eastern Conference Semifinals.

The Bruins made it all the way to the Stanley Cup Finals, but ultimately came up short against the Chicago Blackhawks.

Chicago, May 29: Brent Seabrook netted the series-clinching overtime goal in Game 7 of the Western Conference Semifinals to lift the Chicago Blackhawks over the Detroit Red Wings. The Blackhawks went on to defeat the Boston Bruins in six games to win the Stanley Cup.

Los Angeles, June 3: Dodgers outfielder Yasiel Puig burst onto the national in his very first Major League game. The 23-year-old Cuban defector finished 2 for 4 at the plate, including a hit in his first career at-bat. But it was Puig’s defensive prowess that stole the show. He threw an absolute frozen rope from right field to first base to complete a game-ending double play, leaving spectators with their jaws hanging on the floor.

Miami, June 18: The San Antonio Spurs — holding a 3-2 series in the NBA Finals against the Miami Heat — were mere seconds away from hoisting the Larry O’Brien Championship Trophy. Then veteran guard Ray Allen drove a stake through the Spurs’ heart, drilling a timely 3-pointer to force overtime. The Heat went on to win Games 6 and 7, stealing the title from the Spurs and securing back-to-back NBA championships.

Ray Allen's AMAZING game-tying 3-pointer in Game 6!Check out this INCREDIBLE three pointer by Ray Allen in the closing seconds of Game 6 of the NBA Finals that ties the game and forces overtime where the Heat would go on to win and force a final & decisive Game 7 in Miami against the Spurs! About the NBA: The NBA is the…2013-06-19T04:24:52.000Z

Detroit, September 8: Adrian Peterson’s freakish athleticism, tireless work ethic and punishing running style have earned him recognition as one of the greatest tailbacks of all time. He exploded out of the gate like a thoroughbred stallion to begin the 2013 season, taking his very first carry from scrimmage 78 yards to paydirt.

College Station, September 14: Johnny Manziel, better known to the sporting world as Johnny Football, burst onto the scene in 2012 by leading Texas A&M to an upset victory over the top-ranked Alabama Crimson Tide. Although the Aggies would fall 49-42 in the 2013 rematch, it was no fault of Manziel’s. The electrifying quarterback put together a sensational game, including this mind-blowing scramble in the second quarter.

According to NFL Draft Scout, Manziel is the second-ranked quarterback in the 2016 class.

New York, September 26: The legendary Mariano Rivera made his emotional final appearance at Yankee Stadium on September 26, marching out to the mound in the 8th inning in a game in which New York trailed 4-0. Rivera threw 13 pitches, retired four batters and, fittingly, didn’t allow a single base runner.

Rivera, a 13-time All-Star and 5-time World Series champion, is the MLB’s all-time saves leader (652). Here’s his 19-year career summed up in one graphic:

Exit Sandman: Mariano Rivera leaves mound for final time9/26/13: Mariano Rivera is overwhelmed with emotion as he receives a heartfelt ovation, hugs from Derek Jeter and Andy Pettitte upon exiting his final career game at Yankee Stadium Check out http://m.mlb.com/video for our full archive of videos, and subscribe on YouTube for the best, exclusive MLB content: http://youtube.com/MLB About MLB.com: Commissioner Allan H. (Bud)…2013-09-27T21:00:33.000Z

Boston, October 13: David Ortiz changed the course of the ALCS with a crushing grand slam in the eighth inning of Game 2 against the Detroit Tigers. With the Red Sox trailing 5-1 in the game and 1-0 in the series, Big Papi’s timely blast gave Boston the momentum they wouldn’t relinquish en route to their eighth World Series pennant.

David Ortiz ties the game with grand slam in 2013 ALCS Game 210/13/13: David Ortiz crushes a clutch grand slam over the right-field wall off Joaquin Benoit Check out http://m.mlb.com/video for our full archive of videos, and subscribe on YouTube for the best, exclusive MLB content: http://youtube.com/MLB About MLB.com: Commissioner Allan H. (Bud) Selig announced on January 19, 2000, that the 30 Major League club owners voted…2013-10-14T19:30:02.000Z

Louisville, November 6: Ware’s determination, humbleness and optimism captured the heart of the nation in the wake of his grisly leg injury. The 20-year-old returned to action in a November 6 game against Pikeville, and, in a truly inspiring moment, drilled his first shot attempt in his first game back.

Men's Basketball – Kevin Ware's First Shot of 2013-14 SeasonUniversity of Louisville men's basketball junior KEVIN WARE returned to the court for the first time since breaking his right leg in the 2013 NCAA Midwest regional final. Playing in the final exhibition game prior to the 2013-14 season, Ware hit a three-pointer on his first field goal attempt from the right wing and evenutally…2013-11-07T04:27:45.000Z

Baltimore, November 28: Steelers head coach Mike Tomlin overstepped his bounds — literally — during a November 28 game against the arch-rival Baltimore Ravens. Tomlin stepped on the field while Ravens kick returner Jacoby Jones was streaking down the Steelers sideline toward the end zone, forcing Jones to alter his path to avoid a collision. This slight shift appeared to slow Jones down enough to allow Pittsburgh’s Cortez Allen to catch him from behind.

The NFL docked Tomlin $100,000 for interfering with the play – the second-highest fine for a coach in NFL history.

Auburn, November 30: The 2013 Iron Bowl between Auburn and Alabama was a dandy. Knotted at 28 in the waning seconds, Nick Saban’s team attempted to win the game with a long field goal as time expired. But Auburn’s Chris Davis had victory aspirations of his own. The kick fell short and right into the waiting arms of Davis, who scampered 109 yards with no time on the clock to lift the Tigers.

Auburn will face Florida State for all the marbles in the BCS National Championship on January 6, 2014. The Tigers opened as a seven-point underdog to the Seminoles, according to CBS Sports. 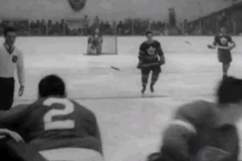 Winter Olympics Then & Now: 10 Amazing Historical GIFs of Sports From the 1920s to Today

Read More
Baseball, Basketball, Football, Hockey, Soccer, Tennis
It has been a spectacular year all across the sporting world. Relive the 20 most memorable sports moments of 2013 here.