President Obama appointed Christine Fox to be acting Deputy Secretary of Defense this morning. Here’s who she is, and what that means:

1. She Served as Director of Cost Assessment and Program Evaluation

According to her biography at defense.gov, Fox has served as the principle staff assistant to the Secretary of Defense since 2009, tasked with “analyzing and evaluating plans, programs, and budgets in relation to U.S. defense objectives and resource constraints.”

While the title “Director of Cost Assessment” might make one think of Fox as a penny-pincher, looking to “reform” the military budget, she has been a strong opponent of the cuts to defense which the next wave of sequester implementation will bring, writing in an op-ed for Defensenews.com in September:

“The cumulative effect of all these sequester cuts is some combination of a military that is much smaller, much less technologically advanced and much less ready than we have been accustomed to over the last 30 years…Pretending that the ongoing political stalemate that perpetuates that the sequester is not harmful is the most harmful thing we can do.”

2. She Was the Inspiration for the Character ‘Charlie’ in ‘Top Gun’

Fox spent two years in the mid-80’s at the Miramar Naval Air Station in San Diego, the training center that served as the inspiration for the Top Gun films.

A profile of Fox in an issue of People Magazine just before the film’s premiere helps capture the dynamic of playful misogyny she navigated there:

“To Navy aviators—described by one of their own as “chauvinistic, macho, self-centered, overzealous, close-minded, hardheaded, egotistical and highly capable”—the sight of Fox striding through headquarters is as enjoyable as a scared MiG pilot running for home. ”

Her nickname was apparently “Legs,” suggesting that “Foxy” was already taken.

3. She Will be the First Female Acting Deputy Secretary of Defense in American History

According to the Airforcetimes.com, Fox will be “the senior-most woman to hold a DoD post.”

4. She Formerly Worked for the CNA’S Operations Evaluation Group

Fox served as Vice President and Director of the Center for Naval Analysis’s Operations Evaluations Group, a position that charged her with providing analysis to operational commanders during the conflicts in Bosnia and Kosove in 1990’s, as well as the post-911 operations in Afghanistan and Iraq.

5. Fox Will Serve Only in an Interim Capacity, Until a Full-Time Deputy Secretary Nominee Can Be Found

Throwing a little cold water on the honor of “first Deputy Secretary of Defense” is the fact that her appointment is only temporary.

A full-time Deputy Secretary has to clear Senate confirmation procedures, a process that can often take months.

With current Deputy Secretary Ash Carter stepping down on Wednesday, appointing an “acting” replacement allows Obama to keep all other DoD Senior Officals in place as the Pentagon develops it’s 2015 budget and attempts to ward off the coming cuts imposed by sequestration. 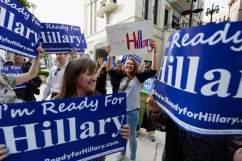