As the United States mourns the loss of one of the world’s greatest leaders, it’s important to remember the long and tenuous relationship between the U.S. and Nelson Mandela.

Long before Mandela was South Africa’s first black president, he was considered a radical and a terrorist by both the white South African regime and the United States. His close association with South African communists, as well as his encouragement of civil disobedience and sabotage, was enough to convince the CIA to get involved.

Shortly after he was released in 1990 from a 28-year stint in prison, the New York Times reported that an undercover CIA agent within Nelson Mandela’s party, the African National Congress, was pivotal in Mandela’s 1962 arrest. The agent provided “South African security officials with precise information about Mr. Mandela’s activities that enabled the police to arrest him.” An unidentified source from within the CIA also told the New York Times,

We have turned Mandela over to the South African Security branch. We gave them every detail, what he would be wearing, the time of day, just where he would be.

The CIA maintained an extensive file on Mandela, even while he was in prison. The document below, declassified in 2001, shows how in 1986 the CIA ran hypothetical scenarios to see what South Africa would be like if Mandela were free. The documents also show an analysis of how prison may have changed Mandela’s view on violence as a protest tactic.

The next document, seen below, was declassified by the CIA in 2003 and dates back to 1961. One year before Mandela was arrested, the CIA wrote of him:

Nelson Mandela, who led the strike campaign in May, reportedly stated in mid-September that an ANC sabotage campaign would begin in the near future. Mandela said that the campaign would concentrate initially on telephone lines and government offices but later might include roadblocks and railroad sabotage.

Nelson Mandela is a world hero for his work in the fight against racial and economic inequality and oppression. This week, as the United States reflects back on Mandela and his struggle, it must also remember the role that it played in maintaining the status-quo in South Africa. 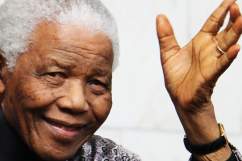