Oscar-winning screenwriter Dustin Lance Black has been revealed, by E Online, as the boyfriend of Tom Daley, the 19-year-old Olympic diver who came out to the world this week in a YouTube video.

Black is 39 years old. Daly is just 19. The pair were first seen together in October, reports Queerty. Back then, it seemed pretty harmless as the pair were just getting coffee at The Coffee Bean in Hollywood.

The couple’s relationship will be featured in the UK tabloid, The Sun: 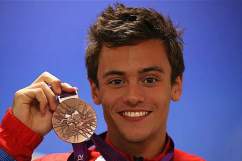 Born in Sacramento, California, and raised in Texas, Black was brought up a Mormon — a religion that frowns on homosexuality. He admitted in an interview to The Bay Area Reporter that he first found himself attracted to another boy at the age of “six or seven.”

His father, who was in the military, moved the family back to California when he was stationed in Ford Ord in Salinas, California, when Black was in high school. It was at that age that Black first began to encounter out, gay men, and became comfortable with his sexuality. 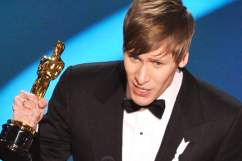 Dustin Lance Black, Tom Daley’s BF: All the Pictures You Need to See

3. Sex Pics of Him Were Published Online

The Advocate reports that Black filed a lawsuit in 2009 after photos of him allegedly having unprotected sex with a man were published online.

According to a legal article on the lawsuit:

Black alleges that in November of 2006, he was in a relationship with Jeffrey Delancy and he observed Delancy holding a small camera and taking photographs during their intimate moment. When Black realized that the photos were of an explicit nature, he asked Delancy to delete the images from the camera, and Delancy complied.

Black, however, was unaware that Delancy had also captured their intimate moments on video and downloaded the same onto his computer. The relationship ended soon thereafter.

4. He Won an Oscar for a Gay Rights Masterpiece

A brilliant screenwriter and gay rights activist, black won the Oscar for best screenplay in 2009 for Milk, starring Sean Penn. His Oscar acceptance speech became an instant viral hit where he said:

I want to thank my mom, who has always loved me for who I am even when there was pressure not to…’

But most of all, if Harvey had not been taken from us 30 years ago, I think he would want me to say to all of the gay and lesbian kids out there tonight who have been told that they are less than by their churches, or by the government, or by their families, that you are beautiful, wonderful creatures of value, and that no matter what anyone tells you, God does love you and that very soon I promise you, you will have equal rights federally across this great nation of ours.’

Thank you, and thank you God for giving us Harvey Milk.

5. Black’s Received Death Threats on a Recent Visit to Russia

While his boyfriend was making waves in the West, Black was in Russia fighting for gay rights, according to his Twitter page.

Made it back home safe and sound. Thanks for all of your support. Remarkable weekend. Very long day!

Variety reported that Black was making the journey with Milk director, Gus Van Sant, despite bomb threats being made against the traveling party.

Dustin Lance Black, Tom Daley’s BF: All the Pictures You Need to See