The Nottinghamshire Police in Central England have caused backlash when they posted their own rhyming version of “Twas the Night Before Christmas” about a woman getting raped. Their version, named “The Nightmare Before Christmas” like the Tim Burton film, is a rhymed poem about a woman who gets chosen by a rapist and attacked before the police catch the perpetrator.

According to the BBC, the campaign was intended to raise awareness about sexual assaults, but has become the target of critic. Helen Chamberlain from the Nottinghamshire Police told the BBC, “We have been heavily criticised in the past for focusing on victims and giving out persistent warnings to victims about keeping safe. This year we decided to try a different tactic and target the perpetrator.” 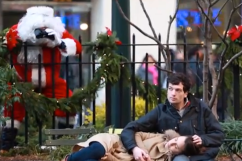 WATCH: ‘The NSA Is Coming to Town’—the ACLU’s Christmas Video