The shooting occurred here on the 4300 block of Ascendant Drive in Northeast Colorado Springs. (Google Streetview)

A man in Colorado Springs, Colorado is reported to have shot and killed his 14-year-old stepdaughter after mistaking her for a burglar early on the morning of December 23, according to The Colorado Springs Gazette.

The man has not been arrested according to local media sources. His name, nor the 14-year-old girl’s name are being released yet by authorities.

KOAA reports that the girl was found by paramedics in the basement of the home with a gunshot to the chest, she was rushed to hospital where she was pronounced dead.

Police spokesman Larry Herbert told the media that the original 911 call said that a robbery was in progress. The 911 call indicates that the girl may have been coming in through a window.

The Daily Mail reports that the man may be protected from prosecution due to Colorado’s “Make My Day” law which allows people to defend their homes at the slightest hint of intrusion. 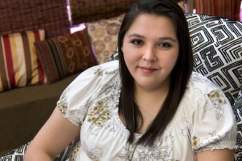 High School Girl Reports Rape, Gets Kicked Out of School

Read More
5 Fast Facts, Breaking News, Colorado, Guns
The stepfather is reported to have believed that his stepdaughter was an intruder. She was pronounced dead at a local hospital.