The Federal Communication Commission may be lifting its 22-year-old ban on making cell phone calls in airplanes. The agency voted 3-2 today to allow cell phone usage on flights citing findings that there is no technical reason for the ban.

Thomas Wheeler, the chairman of the FCC, told members of Congress that, “When the rationale for a rule doesn’t exist, the rule shouldn’t exist.” Wheeler’s plan would be to allow individual airlines to restrict cell phone use as they saw fit, CNN reports.

However, the Department of Transportation is moving forward with its own restrictions on cell phone usage in the air. 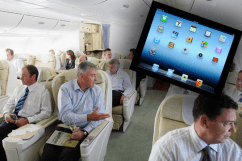 FAA: You Can Now Use iPads During Takeoff & Landing

Loading more stories
wpDiscuz
0
0
Would love your thoughts, please comment.x
()
x
| Reply
You're one step closer to making phone calls in the air.