They’ve been referred to as “Vine-famous,” but with two trending terms on Twitter, it’s safe to say that the Grier brothers from North Carolina have crossed over into “social media stars.” Teenagers Nash, 15, and Hayes, 13, have amassed nearly 2 million followers on Vine alone. You can watch 100 of their Vines above.

Here’s what you need to know about the brothers Grier:

The Charlotte Observer reported in October that the Vine account that both brother use but is under Nash’s name, gains about 100,000 followers per week. They have followers as far as Australia and Saudi Arabia. 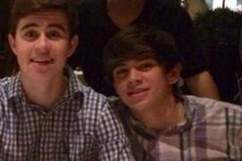 2. They Use the Hashtag #Notaracist

Some of the Vines are a little racy, ethnically speaking, with the Grier brothers using stereotypes which left them using the hashtag “#notaracist.” The boy’s father, Chad, said about the videos: “Some are PG-13, but never R.”

A Vine of the boys’ sister saying America needed Jesus was retweeted by Alabama high school student and fellow Vine star Tiffiny Semashko, leading to a further 300,000 retweets. From there, the boys’ celebrity was created.

4. Their Father is Looking to Capitalize

Their father, Chad, has stepped in to control the boy’s growing celebrity. He alleges that they are getting lots of phone calls and emails looking to use the boy’s celebrity, Chad says: “We’re going to have to put an end to it. I want Nash to be Nash.”

Their father is a football coach at Davison Day, where Nash is a sophomore.

5. They’ve Made Their Sister a Star

They’re 4-year-old sister, Skylynn, has become an unwitting viral sensation thanks to her participation in the videos. Her Facebook page alone has 151,000 likes.

Read More
5 Fast Facts, Breaking News, Vine
The two brothers are "Vine-famous." But are they racist?