No Charges in Jameis Winston Sex Assault Casesmarturl.it/AssociatedPress A prosecutor says Florida State quarterback Jameis Winston will not be charged in a sexual assault case. The Heisman Trophy candidate was accused of raping a female student in December last year. (Dec. 5) The Associated Press is the essential global news network, delivering fast, unbiased news from every corner of the world to…2013-12-05T19:36:35.000Z

We’ve carefully examined all the evidence in this case, and have carefully concluded no charges will be filed against anyone in this case,” Florida state attorney Willie Meggs announced at Thursday’s press conference.

Watch the video above to see Willie Meggs’ make the announcement to the press.

The alleged incident between Winston and his accuser occurred on December 7th, 2012 – nearly a year before the conclusion of the investigation. Police were called, evidence was gathered and the accuser identified Winston as the suspect on January 10th, according to Sports Illustrated.

Tim Jansen, Winston’s attorney, was contacted about the case in February. Soon thereafter, the Tallahassee Police Department closed the case. Winston was not interviewed by law enforcement.

The 19-year-old’s DNA was found on the accuser’s underwear, ESPN reported in late November.

While it’s clear there was sexual contact between Winston and the accuser, there was insufficient evidence to prove it was not consensual.

Willie Meggs: "I know there was a sexual event that occured. One side side it wasn't consensual, the other side said it was."

Meggs asked if he could tell if there was a struggle based on rape kit. "No."

Jameis Winston ᴴᴰ || 2013 Heisman Winner | HighlightsWelcome to Harris Highlights! The #1 Highlight Channel on YouTube (↓↓ click show more ↓↓) Hi, my name is Blake. Welcome to my channel! Here, you will see some of the best highlights on YouTube! I'm a senior in high school doing something that I really love, hoping to make it to the next level.…2013-10-21T00:37:33.000Z

Winston is having an incredible year on the field, leading the Seminoles to a perfect 12-0 record and a date with the upstart Duke Blue Devils in the ACC Championship on Saturday.

He was named ACC Player of the Year on Wednesday, and, despite the investigation, is still the favorite to win the Heisman Trophy. According to USA Today Sports Heisman Survey, Winston holds 43 percent of the total vote. Northern Illinois quarterback Jordan Lynch comes in at a distant second with 19 percent of the vote.

Winston has 3,490 passing yards and 35 touchdowns on the season.

With a win against Duke in the ACC Championship, Winston and the Seminoles will advance to the BCS National Championship on January 6, 2014. 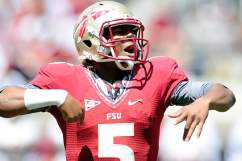