Free-agent reliever Joba Chamberlain will try to revive his stalled career in Motown. The heavyset flamethrower, who spent the last seven seasons with the New York Yankees, signed with the Detroit Tigers, FOX Sports’ Ken Rosenthal reported on Thursday.

According ESPN’s Buster Olney, it’s a 1-year deal worth $2.5 million – with performance incentives.

2. Detroit Needs Depth in the Bullpen

Although the Tigers have already inked Joe Nathan as their closer, Joaquin Benoit isn’t likely to return and Drew Smyly is heading to the starting rotation. This leaves first-year skipper Brad Ausmus’ club in need of help in the bullpen – which is exactly where Joba fits in.

Chamberlain was forced to sit out a month last season with an abdominal strain. Prior to that, the 230-pound righty underwent Tommy John surgery in June 2011 and suffered a severe ankle dislocation in March 2012.

4. His Performance Has Declined in Recent Seasons

After storming onto the scene with the Yankees in 2007, Chamberlain’s numbers began to decline in 2009. The 28-year-old put up pedestrian numbers this year, posting a 4.93 ERA and 1.74 WHIP in 42 innings pitched.

5. Chamberlain Still Has a Rocket Arm

Despite recent struggles, Chamberlain still throws a high-velocity fastball, which, according to NBC Sports, averaged 94.7 miles per hour this year. 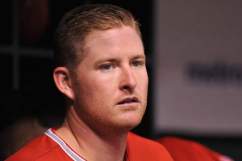