Many people are disturbed at the casual tone taken by state attorney Willie Meggs and reporters during Thursday’s press conference regarding the sexual assault investigation of Florida State quarterback Jameis Winston.

Winston was not charged due to lack of evidence.

Take a look at the video below:

A number of reporters, pundits and media members expressed their discomfort with the unusually cheery mood at the presser:

Anyone else uncomfortable with the amount of smiling/laughter in this press conference?

I will vote for Winston No. 1 on my Heisman ballot. But I wouldn't vote for Willie Meggs after this news conference to be Dog Catcher.

I don't care what you think of this case but the fact that anyone can laugh and make quips with a situation this serious is really sad. 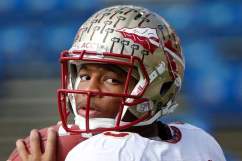 Read More
College Football, Investigation, Press Conference
wpDiscuz
0
0
Would love your thoughts, please comment.x
()
x
| Reply
The tone was unusually lighthearted when state attorney Willie Meggs announced that Jameis Winston would not be charged with sexual battery at a news conference on Thursday.