Mary Barra became the CEO of America’s largest automaker. Here’s what we know about her:

1. She Will Be the First Female CEO Among All Major American Automakers

According to Bloomberg , Barra will be the first female CEO of any major American car company. Only 4% of all Fortune 500 companies had a female CEO in 2013, still the highest percentage of any year on record.

2. She First Joined GM When She Was Just 18 Years Old

According to Forbes, Barra first began work at GM when she was 18, to help finance her education in electrical engineering at Kettering University (formerly the General Motors Institute).

Barra, grew up in a GM household, her father working for GM for 39 years as a die-maker.

3. The Government Just Sold Its Last Shares in GM Yesterday

In December of 2008, President Bush approved a bailout plan which gave General Motors $13.4 billion from TARP (Troubled Assets Relief Program) funds, in addition to $4 billion to be withdrawn at a later time.

In March 2009, President Obama continued the bailout, demanding GM restructure its company, in exchange for additional bridge loans from the US Treasury.

Yesterday, the US Treasury announced the sale of all the government’s remaining shares in GM, taking a $10.5 billion loss.

According to US Today, a report released this morning from the Center for Automotive Research suggests that the government bailout of GM “saved 1.2 million U.S. jobs and preserved 34.9 billion in personal income and social insurance (Social Security, Medicare) payments”.

The report stipulates that most of those jobs and payments would have likely recovered by now without federal intervention, however those job gains would have been concentrated in the southeastern United States where many foreign carmakers have expanded their manufacturing capacity. The result of this shift would have been double digit unemployment rates across the upper Midwest.

According to a profile in Stanford’s alumni magazine, Barra tries not to “dwell on the dark days before and after GM filed Chapter 11 [bankruptcy]”, a period when she and many others in downtown Detroit worked for days on end, powered by diet coke, adrenaline and the mantra “We’re going to get through…We’re going to make it through.”

4. Barra’s First Car Was Almost a Pontiac Firebird Before She Wimped Out

The “Chevy Chevette” (via Getty)

According to that same Stanford profile, Barra payed down a deposit on the Firebird, the summer before she left for college. At the last moment though, pragmatism beat out romance, and 18 year-old Barra settled for a Chevrolet Chevette, an “affordable, boxy hatchback” marketed for its legroom and trunk space. Barra would pine for the Firebird in later years, but that penchant for practical self-denial likely helped her attain her present position, in which she she earns the equivalent of 228 Pontiac G6’s per year.

Barra brought home that bacon as Executive Vice President of “Global Product Development and Global Purchasing Supply Chain“. In that post, she oversaw the design, engineering, and quality of all GM vehicles. Her tenure saw a 13% growth in sales, that Alex Gutierrez of Kelly Blue Book credits to “a host of new introductions and redesigns that have caught the attention of consumers.”

Business Insider has a rundown on GM’s greatest design successes under Barra’s leadership, which include the resurgence of the Cadillac luxury brand, the new Chevy Impala (named best sedan on the market by Consumer Reports), and Corvette, which has set a “new benchmark” for gas mileage among sports cars.

In an interview with Bloomberg from this March, Barra talks up GM’s new vehicles, as well as her “Team Oriented” management philosophy:

She will be replacing Dan Akerson, who had been appointed by the Obama administration in 2009 to lead GM through its bankruptcy process. Akerson took home $11.1 million in 2012.

In her profile in Stanford’s alumni magazine, Barra ticks off the challenges facing GM, and every other carmaker, in the years ahead:

“Automakers must develop and master advanced propulsion systems, including electric-powered cars and trucks that can drive hundreds of miles without a charge and deliver handling and brawn on par with traditional gasoline engines. Engineers will need to safely integrate smart technology for drivers and ‘infotainment” for passengers.'”

Here’s hoping she enjoys the “experience” of the driver’s seat. 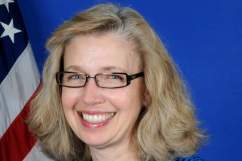