This video was posted online by David Goodship in the UK. It shows an Emirates 777 aircraft trying to land at Birmingham International Airport in England and then being forced to take off again when the winds are just too strong.

The flight was diverted to London.

With a massive storm whacking England right now, two people are reported to have been killed from flooding. We wish all the best to our colonial cousins. 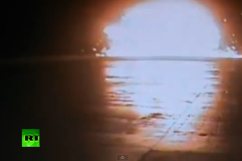 Read More
Airports, Breaking News, Videos
wpDiscuz
0
0
Would love your thoughts, please comment.x
()
x
| Reply
Just thank your lucky stars you're not on board this flight.