Thursday morning, a 33 year-old American teacher, Ronnie Smith, was shot dead on the street in Benghazi, Libya. Here’s what we know:

1. He Was Shot to Death While Jogging in Eastern Benghazi

According to a report from USA Today, Libyan officials say that Smith was gunned down while on a morning run in Eastern Benghazi. At this time, no one has claimed responsibility for his death, suggesting that the killing is more likely a result of petty crime rather than terrorism.

2. He Taught Chemistry at an International School in Libya

News of Smith’s death was first reported by the principal of International School Benghazi, Peter Hodge. Hodge told NBC News that Smith was “very much loved” at the school.

The school’s former principal, and current head of its board of governors, Adel Mansour said of Smith:

“He loved being in Benghazi and he loved Libya and the kindness of its people.”

In his twitter bio, Smith described himself as “Libya’s Best Friend”:

3. He Had a Wife and Young Child

It's official: I miss my family.

According to NBC News, Smith’s wife and young son recently returned to the United States in anticipation of the holidays.

Smith’s former principal Adel Mansour told NBC News: “He was looking forward to going back and being with his family [to the U.S. for Christmas] but unfortunately now that’s not going to happen.”

4. In October, Islamist Militants Called for Violence Against Americans

Libyan Islamists are threatening kidnappings. As if they can fit kidnapping into a 2 hr work day that already includes a nap. Losers

Since the attack on the US Consulate on Sept. 11, 2012, which resulted in the death of American ambassador Chris Stevens and three other Americans, Benghazi has become a flash-point in both American and Libyan politics.

The timing of the attack, just two months before the American presidential election, amplified scrutiny of the Obama administration’s response. Several investigations and congressional hearings were launched in attempt to confirm the attack’s exact sequence of events, and to assign responsibility for the breakdown in security that allowed the attack to succeed.

Two years after NATO chose to intervene on behalf of a Libyan uprising against Moammar Gadhafi, Libya is ruled by a temporary government operating without a constitution, its security forces struggling to contain independent militias and bands of former rebels.

Ansar al-Shariah, a hardline Islamist group was blamed for the embassy attack. According to NBC News, this October, in response to a raid by US Special Forces on the Tripoli home of a suspected al Qaeda leader, Islamist militants “called for the kidnapping of U.S. citizens in Libya and targeted attacks on American property.”

5. He Was Just One of Four People Killed in Benghazi Today

According to The International Buisness Times, three Libyan civilians have also been shot today, demonstrating the violence and instability that have impinged on daily life in Libya post-revolution.

In some areas of Benghazi, Islamist militias run their own checkpoints, bombings and assassinations occur on an almost daily basis. Just a week ago, clashes between the Libyan army and Islamists in the city left at least nine people dead.

According to Reuters, most countries have closed their consulates in Benghazi, and several airlines have stopped flying there.

In mid-November, in the wake of clashes in Tripoli that left more than 40 people dead, Secretary of State John Kerry called on Libyans to “break the cycle of violence through respectful dialogue and reconciliation…Too much blood has been spilled and too many lives sacrificed to go backwards.” 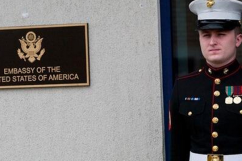 Explosion Near US Embassy in Yemen: 5 Fast Facts You Need to Know