The Seattle Seahawks routed the New Orleans Saints 34-7 on Monday Night Football, firmly establishing itself as the team to beat in the NFC.

Everything went Seattle’s way in a thoroughly dominating performance, including this unlikely touchdown in the third quarter:

With just over seven minutes remaining in the third quarter, Seattle quarterback Russell Wilson rolled out of the pocket and threw a pass intended for tight end Kellen Davis, who couldn’t haul it in. The ball bounced off Davis’ hands, popped into the air and landed right in the waiting arms of running back Derrick Coleman, who leaped into the end zone for the game’s most decisive touchdown.

The Seahawks, who moved to 11-1 with last night’s resounding victory, are in great position to secure home field advantage throughout the playoffs. 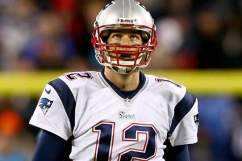 Read More
Football, NFL
wpDiscuz
0
0
Would love your thoughts, please comment.x
()
x
| Reply
Everything went the Seattle Seahawks' way in Monday night's 34-7 victory over the New Orleans Saints, including an implausible touchdown on a tipped ball in the third quarter.