South African revolutionary Nelson Mandela died at 95 on Thursday. Here are some reactions from the sports community on Twitter:

Just heard the news…RIP Nelson Mandela. He's an icon, an inspiration and a true leader and will be greatly missed #GoneButNeverForgotten

Thank you, My. Lord, for giving us Nelson Mandela. Rest in eternal peace!

My thoughts & prayers go out to Pres Nelson Mandela's family on his passing today. One of the greatest humans I ever had privilege to meet.

Nelson Mandela was the embodiment of discipline, courage, love and forgiveness. "There is no future without forgiveness"-@NelsonMandela

"There is no passion to be found in playing small – in settling for a life that is less than the one you are capable of living." Mandela -SG

Nelson Mandela's courage, forgiveness, love & hope inspired people around the world. He made me want to be a better man. RIP Tata

When the world gave #NelsonMandela their worst, he showed us all his best. A thousand years from now mankind will still revere him… 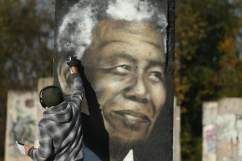