Yesterday, on the first day of Hamburg’s 30c3 hacking and tech conference, journalist Glenn Greenwald gave a stirring almost hourlong keynote address. He spoke about the hope he has for the revitalized movement focused on curbing of government surveillance. He also gave credit to those important figures who contributed to the effort for privacy, Chelsea Manning, Wikileaks, and even the leaker of the Pentagon Papers Daniel Ellsberg.

Greenwald, the journalist who published and continues to publish, the documents leaked by former NSA analyst Edward Snowden, spoke on Skype at the conference because of the dangers and political loopholes involved with his travel. 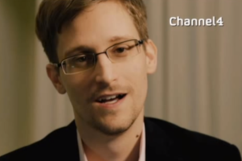