Bobby Petrino is expected to fill the head coaching vacancy at the University of Louisville, according to a report by Yahoo! Sports.

The Louisville job was vacated earlier this month when Charlie Strong left to take the head coaching job at the University of Texas.

Here’s what you need to know about Bobby Petrino:

1. It Will Be His Second Stint at Louisville

Petrino was the head coach of Louisville for four seasons from 2003 to 2006, leading the Cardinals to two conference championships, a pair of bowl wins and an impressive 41-9 record over that span.

Petrino’s oldest daughter Kelsey graduated from the University of Louisville. His youngest daughter Katie is currently a a redshirt junior on the Cardinals golf team.

2. Arkansas Fired Him in 2012 Following a Messy Scandal

Petrino’s success at Louisville landed him the head coaching job at Arkansas in 2007. He replaced Houston Nutt, who left the school for Ole Miss after 10 seasons with the Razorbacks.

Petrino’s tenure at Arkansas came to a messy end after just four seasons with the school. The 52-year-old was involved in a motorcycle accident in April 2012, which eventually led to his downward spiral and dismissal from the school. It was discovered that Petrino had been keeping an adulterous relationship with graduate assistant and former Arkansas volleyball player Jessica Dorrell, who was less than half his age.

Watch Petrino speak to the media following the motorcycle accident. He originally lied about whether Dorrell was with him at the time.

Bobby Petrino Lies About Motorcycle AccidentArkansas Razorback Football Head Coach Bobby Petrino gives a press conference soon after a motorcycle accident involving himself and 25 year old Jessica Dorrell and lies when asked whether or not there was another passenger.2012-04-06T04:35:18.000Z

3. He Was Subsequently Hired as Western Kentucky Head Coach

After his firing from Arkansas, Petrino’s started his path to redemption by accepting the head coaching position at Western Kentucky University. The Hilltoppers finished the 2013 season with an 8-4 record, good for third place in the Sun Belt Conference. However, the team was not invited to a bowl game.

4. He’s Been Extremely Successful in the Collegiate Ranks

Petrino has been an extremely successful college coach, boasting an 83-30 overall record in nine total seasons.

He built Louisville into a national power, leading the Cardinals to 11-plus wins in 2004 and 2006 for just the second and third times in school history. In his last season at Arkansas, Petrino guided the football team to just its third-ever 11-win season.

5. He Has a History of Questionable Behavior

Petrino has a history of questionable behavior. In addition to the inappropriate relationship that ultimately cost him his job at Arkansas, Petrino left the Atlanta Falcons in the middle of his first season as head coach. Then-Falcons defensive coordinator Mike Zimmer called him “gutless” for quitting on the team in the middle of the year.

He was also criticized for having one foot out the door during his first tenure at Louisville. CBS Sports’ Greg Doyle said the following of Petrino following the Cardinals’ 24-13 win over Wake Forest in the 2007 Orange Bowl:

Not to dredge up too much history, but Petrino has spent the last several years suggesting that Louisville won’t be his final destination. When it comes to flirting with other schools, Petrino is such a tramp that I’m guessing he carried his cell phone on the sideline Tuesday, just in case Alabama or the Miami Dolphins were trying to reach him.” 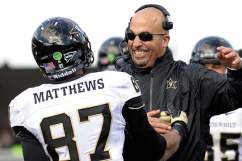 Read More
College Football
Bobby Petrino is expected to be the next head football coach at the University of Louisville.