Steve Tran just came forward as the second winner of last month’s Mega Millions jackpot. Dude will take home a cool $324 million before taxes. And while that money could have gone to repair a failing bridge, or feed third-world orphans, if I know anything about Steve Tran, I know he deserves that money. Here’s what I know about Steve:

1. Tran Purchased His Winning Ticket at a Gift Shop

According to the LA Times, Tran purchased his ticket at Jenny’s Gift Shop in San Jose, California.


Duh. Why didn’t you think of that?

When Tran first heard the Mega Millions winner was from San Jose, he did not immediately realize that the winner could be himself. That was in part because in the course of running his delivery route, Tran had purchased his lottery tickets in cities all across the country.

4. For the Past Month, Tran Had No Idea He Had Won

Tran added his winning ticket, to a pile of others collected in his travels. The whole mess of them sat in a desk drawer, while he and his family went on holiday vacation.

Upon returning from vacation, Tran woke in the middle of the night, his dreaming mind having provided a sudden insight: The winning lottery ticket was purchased in San Jose. He might have passed through San Jose. If he did, he probably bought a ticket there. At 3 a.m. he checked his pile of tickets. He then called his boss, leaving the following message: “I’m really sorry boss. I hit the jackpot. I don’t think I’m going to come in today, tomorrow, or ever.”

5. He is The Winner of the Second Largest Mega Millions Jackpot Ever

The largest ever was a $656 million sum, paid out on March 2012, split between an Illinois couple, and three friends who worked in the Maryland education system.

Tran’s ticket is worth $324 million before taxes, if he’s willing to receive it in increments. If he opts for the lump sum, as his co-winner Ira Curry did, he’ll take home $173 million, prior to taxes. 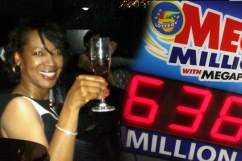