In a piece titled “I Was An NFL Player Until I was Fired By Two Cowards and a Bigot,” published by Deadspin today, Chris Kluwe alleges that his release from the Minnesota Vikings last spring was motivated by the homophobia of Special Teams Coach Mike Priefer. Kluwe’s article offers a catalog of tense moments between Kluwe and his coach, over the course of the former’s final season with the Vikings.

Kluwe writes near the piece’s end: “If there’s one thing I hope to achieve from sharing this story, it’s to make sure that Mike Priefer never holds a coaching position again in the NFL, and ideally never coaches at any level.”

Here’s what you need to know about the feud:

1. Kluwe Claims Priefer Said That All Gays Should Be ‘Nuked’

Kluwe’s account begins in the summer before the 2012 season, when Minnesotans for Marriage Equality reached out to the Viking’s punter to try to secure him as an advocate against the Minnesota Gay Marriage Ammendment, which was to be voted on that November. The proposed amendment would have defined marriage as a union between a man and a woman. Kluwe checked with the Vikings front office, and was told he was free to advocate against the amendment, so long as he made clear that his advocacy was personal, and did not represent the view of the Vikings organization.

However, when Kluwe entered the national conversation on gay marriage, through a widely read open letter to a Maryland state delegate who had reprimanded Baltimore Ravens player Brendon Ayanbadejo for his gay rights advocacy, Kluwe claims Coach Priefer began using homophobic language in his presence. Kluwe writes of Priefer:

“He would ask me if I had written any letters defending “the gays” recently and denounce as disgusting the idea that two men would kiss, and he would constantly belittle or demean any idea of acceptance or tolerance…[he] said on multiple occasions that I would wind up burning in hell with the gays, and that the only truth was Jesus Christ and the Bible. He said all this in a semi-joking tone, and I responded in kind.”

Kluwe writes that he’d hoped Priefer’s behavior would change once the election season passed, and his advocacy against the amendment was concluded. He then describes entering a team meeting toward the end of November 2012, joking with several teammates about his gay rights advocacy, a fellow player imagining Kluwe at the head of the gay pride parade. Kluwe writes this jovial mood dissipated the moment Coach Priefer spoke:

“As we sat down in our chairs, Mike Priefer, in one of the meanest voices I can ever recall hearing, said: “We should round up all the gays, send them to an island, and then nuke it until it glows.” The room grew intensely quiet, and none of the players said a word for the rest of the meeting. The atmosphere was decidedly tense. I had never had an interaction that hostile with any of my teammates on this issue—some didn’t agree with me, but our conversations were always civil and respectful. Afterward, several told me that what Mike Priefer had said was “messed up.”

Back in June of 2013, ESPN published an article titled “Mike Priefer felt ‘very strongly’ Vikings needed to dump Chris Kluwe.” The article claims that Priefer “didn’t want to get too deep into specifics” about why the Vikings released Kluwe, telling ESPN “It was more consistency and productivity. I just felt like we needed to make a change there.”

He went on to say of Kluwe:

The Vikings released a statement on Kluwe’s accusation, which reads in part: “Any notion that Chris was released from our football team due to his stance on marriage equality is entirely inaccurate and inconsistent with team policy. Chris was released strictly based on his football performance.”

2. Kluwe Was Replaced by a Much Cheaper Rookie With Comparable Stats

Aside from anecdotal evidence of Priefer’s homophobia, Kluwe’s case rests on the fact that his punting stats from 2012 are slightly better than his career average. His average yards per punt was 45.0 in 2012, compared with a career average of 44.4. Kluwe notes that this career average, put together in the course of eight seasons with the Vikings, is the highest of any punter in the franchise’s history. He further asserts that those numbers don’t reflect his full potential, as he was asked by Priefer to shorten his punts, to sacrifice distance for height, so that the coverage team would have more time to get down the field.

In 2012, Kluwe ranked 17th in the NFL in punt distance, however he ranked next to last for punts inside the 20-yard line.

Viking’s 2013 punter Jeff Locke posted an average of 44.2 yards per punt this past season, .8 yards below Kluwe’s 2012 mark. However, being a rookie, Locke cost the Vikings $405,000 this year. The Vikings would have had to pay Kluwe $1.45 million in 2013, which seems like a fair explanation for why the franchise might have wanted to go in a different direction.

So thinks football analyst Kevin Seifert anyhow, who wrote for espn.com, that it is likely Kluwe was released primarily because of his age and on-field performance:

“He was a 31-year-old veteran who had produced a below-average performance in 2012 based on the criteria the Vikings most valued. He was entering the final year of his contract, one that carried no salary cap hit if he were released, and was playing for a team that had been systematically replacing older players with younger ones. If anything, Kluwe’s advocacy was the final push off the plank.”

Seifert nonetheless believes that Kluwe’s allegation about Priefer’s use of hateful, homophobic language is worthy of investigation and concern.

3. Priefer Is in the Running for Vikings Head Coach

According to Minnesota’s Pioneer Press, Priefer is the only in-house candidate with a chance at the Vikings head coaching job, after 2013 Head Coach Leslie Frazier was fired this past Monday. The Pioneer Press quotes Viking’s safety Jamarca Sanford as saying: “Coach Priefer is a great coach. I would love to see Coach Priefer as a head coach.”

I vehemently deny today’s allegations made by Chris Kluwe.

I want to be clear that I do not tolerate discrimination of any type and am respectful of all individuals. I personally have gay family members who I love and support just as I do any family member.

The primary reason I entered coaching was to affect people in a positive way. As a coach, I have always created an accepting environment for my players, including Chris, and have looked to support them both on and off the field.

The comments today have not only attacked my character and insulted my professionalism, but they have also impacted my family. While my career focus is to be a great professional football coach, my number one priority has always been to be a protective husband and father to my wife and children.

I will continue to work hard for the Minnesota Vikings, the Wilf family and all of our loyal fans.

Several Vikings players have voiced their support for Priefer on twitter:

Since I've had the privilege of playing for Mike Preifer he has been nothing but a class act coach and a respectful human being. #Vikes

I fully stand behind Coach Priefer, Rick Spielman, and Leslie Frazier. Just released a statement regarding the issue at hand.

(1/2) In my short time with the Vikings, Coach Priefer has treated me with respect and has helped me develop as a player and person.

(2/2) I have never witnessed any actions or statements by Coach Priefer similar to those described in the recent Deadspin article.

Priefer has been the Special Teams Coordinator for the Vikings for the past two seasons, having served under the same title with the Denver Broncos and Kansas City Chiefs in the course on 11-year NFL coaching career.

Minneapolis City Pages has called attention to the twitter feed of Priefer’s son, Michael Priefer Jr. His account has since been locked, but an imgur user has compiled a list of tweets in which the teenager frequently uses “gay” as a term of playful derision, and employs the hashtag “instafag.”

4. Kluwe Was Released by the Raiders Last September

Kluwe trained with the Raiders in the 2013 pre-season but lost out to Marqueet King for the team’s punting job. While many on Twitter are arguing that this fact supports the organization’s claim that Kluwe’s release was based on performance, not political activism, others assert that Oakland’s King had better numbers than Kluwe, whereas the other punters the Vikings looked at did not:

If @ChrisWarcraft was so great, why did his last team (Oakland I believe) cut him as well?

5. Kluwe Believes the NFL Is Not ‘Institutionally Homophobic’

Kluwe writes at the end of his piece:

Some will ask if the NFL has a problem with institutionalized homophobia. I don’t think it does. I think there are homophobic people in the NFL, in all positions, but that’s true for society as well, and those people eventually get replaced. All we can do is try to expose their behavior when we see it and call them to account for their actions.

This rounds counter to the portrait of the league found in The Bleacher Report’s, November 2013 investigation into why a closeted NFL player’s plan to come out, never came to fruition. That article cited several NFL team officials who believe “the largest obstacle to an openly gay player is the resistance of a significant number of NFL owners and a smaller number of general managers and coaches.” The piece further found that many in the league “are fearful of acting or even speaking on this subject. Quite simply, teams remain terrified of signing an openly gay player.” 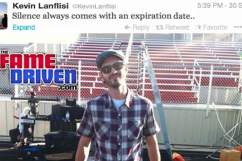