Gary Lee Bullock has been arrested by police in Eureka, California. He’s being held as the main suspect in the murder of popular local priest, Father Eric Freed, reports The Times-Standard. The clergyman was found dead in the rectory of his church on the morning of January 1, the alarm had been raised when he failed to show up for mass. 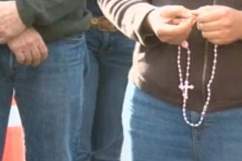 Here’s what you need to know about the suspect:

1. Bullock Was Rejected From Jail on New Year’s Eve Due to ‘Erratic’ Behavior

Bullock is said to match the description of a man who was removed from the church grounds (above) on the morning of January 1. In that instance, the man was confronted by a security guard. Prior to this, Bullock had been arrested for public intoxication on New Year’s Eve, according to a statement from Eureka police. Strangely, Bullock was rejected from the local jail due to “erratic” behavior. He was taken to a local hospital for evaluation before finally being booked into jail at around 4:30 p.m. on New Year’s Eve.

Freed was found badly beaten at around 9:30 a.m. on January 1. There were signs of forced entry and a “violent scuffle.” The official cause of death has not been confirmed but according to Eureka Police Chief Andrew Mills, Freed had suffered “significant blunt force trauma.”

3. He Was Arrested for Drug Possession in April 2013

Although Bullock has a criminal record, there is nothing to indicate a violent past. In April 2013, he was arrested for cocaine possession and pleaded guilty to two misdemeanor charges.

4. He May Have Stolen the Priest’s Car

Bullock was arrested in a house in Briceland, California, some 70 miles from Eureka. Freed’s missing Nissan Altima was found close by the home. He was taken into custody by Humboldt County Sheriff’s deputies. Earlier reports incorrectly stated that Bullock had been pulled over by cops and apprehended.