Yesterday, the controversial and generally detested Hunter Moore, 27, was arrested in his Woodland, California, home. He and an accomplice, Charles Evens, 25, were charged with hacking into email accounts in an attempt to recover naked or sexually explicit photographs to post online.

Here is what you need to know about this act of karma:

1. He Was Arrested for Hacking in Private Email Accounts

According to the affidavit, which you can read above, Hunter was under investigation by the FBI since 2012. The document says that starting in 2011, allegedly proven by an email between Moore and Evens asking to hack emails, the duo hacked into email accounts in order to find nude or sexually explicit content for them to post on their now-defunct website, IsAnyoneUp.com.

They are being charged with 15 counts of federal crimes including hacking and aggravated identity theft. If convicted of all charges, they each face 42 years in prison.

Moore operated the controversial now-defunct website, IsAnyoneUp.com. The website, which launched in 2010, became an outlet through which men and women (but mostly men) could post nude or sexually explicit pictures and videos of their exes in the hopes of getting “revenge.”

3. He Is Known as the ‘Most Hated Man on the Internet’

Jesus died for your sins, i was stabbed for your nudes. pic.twitter.com/KSmwXwGDZy

Moore earned the title after people, featured naked in the photographs on his site, began to attack him both in, and outside of, the courtroom. In 2012, a San Francisco woman who had been featured on the website attacked Moore with a pen knife, slashing at his shoulder, a wound that required surgery.

4. His Accomplice Also Was Arrested

Moore’s accomplice and hacking buddy Charles Evens, 25, is also indicted in these charges. The affidavit alleges that Evens was paid to hack into email accounts and find naked pictures.

5. His Final Tweet Was in Solidarity With an Arrested Bieber

After Justin Bieber was arrested early Thursday morning in Miami for allegedly drag racing while under the influence of marijuana, alcohol and prescription drugs, Hunter Moore tweeted that he was coming to “bust” him out of prison just hours before the FBI came and arrested him.

@justinbieber I'm comin to bust you out lil nigga 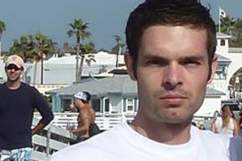