Yesterday on his Facebook page, Daily Beast and CBS journalist Itay Hod posted a status about a “hypothetical” scenario: “what if you know a certain GOP congressman, let’s just say from Illinois, is gay…”

In the whole post, which you can read below, Hod discusses a Republican congressman from Illinois who was caught in the shower with his male roommate and caught by TMZ in gay bars, all the while making not-so-subtle allusions to the fact that this representative is, in fact, Aaron Schock of Illinois’ 18th district.

Hod starts his post by saying that he is usually opposed the to tabloid tactic of “outing” LGBT individuals. However, Schock is an unusual case. As a representative, Schock has opposed a number of gay rights issues like gay marriage and the repeal of “Don’t Ask Don’t Tell.” Listen below to Schock explain his opposition to gay marriage.

Not many people are startled by this revelation as there have been massive amount of speculation as to the representative’s sexuality for years. 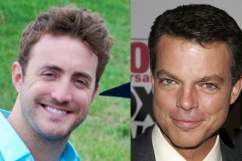