This Sunday, 18-year-old North Carolina high-school student Keith Vidal suffered a schizophrenic episode. Mentally agitated, Vidal frightened his family by wielding a tiny screw-driver as though it were a weapon. His parents telephoned the local police, asking for an officer to help get their son to a place where he could be helped.
Half an hour later, their son was bleeding to death on the floor of their home. Here’s what you need to know:

1. According to Family, Officers Shot Vidal After He’d Already Been Subdued

A 911 report released Monday afternoon revealed that Keith Vidal was shot seconds after a back-up police unit arrived on scene.

According to WECT, an officer from Boiling Spring Lakes arrived on scene at 12:34 p.m. He was quickly joined by two other officers from the BSL police. This first unit called back to dispatch that there was a confrontation in the hallway, but that everything was OK.

Unit 104 from neighboring Southport arrived at 12:48:41. Seventy seconds later, an officer from unit 104 reported to dispatch that he’d been forced to fire in self-defense.

Keith Vidal’s father, Mark Wisley, told WECT that two officers had tased his son and pinned him to the floor, when a third said “we don’t have time for this,” and fired between the two officers, down towards the mentally ill teenager writhing on the floor.

Wilsey summarized his feeling on the incident plainly: “There was no reason to shoot this kid. They killed my son in cold blood. We called for help and they killed my son.”

You can listen to the family’s original 911 call here:

Wilsey told WECT that the family had recently lost a daughter to a car accident, and were now faced with burying a second child. Vidal’s mother suffered a breakdown at the scene and was treated by emergency professionals. 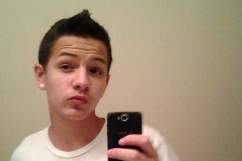 2. One Detective Has Been Put on Leave

Detective Byron Vassey of the Southport Police Department is on paid administrative leave. Southport Police Chief Jerry Dove refused to confirm whether Vassey is specifically suspected as the officer who pulled the trigger.

Vidal was an aspiring musician, with a youtube channel featuring videos of him performing drum covers:

4. The D.A. Says He Will Show No Deference to Law Enforcement

Brunswick County District Attorney Jon David told NBC News, he would “go wherever the truth leads in this case. The public deserves to have a process put in place that will lead to the most just resolution.”

Last October, a 52-year-old Texas man named Bobby Bennet was shot dead by a Dallas police officer, after he had refused to take his medication, and his mother called for help. Officer Cardan Spencer claimed that Bennet had forced him to fire, by lunging at him with a knife. However, a neighbor’s surveillance camera revealed that Bennet made no movement towards Spencer prior to being shot at.

In November, police in Burlington, Vermont, shot and killed 29-year-old Wayne Brunette, a mentally ill man who they claimed gestured threateningly at them with a shovel, after they arrived in response to his mother’s call for help.

An article in the Socialist Worker from 2012, describes the phenomenon of police killing the mentally ill as a quiet epidemic. The article refers to a study conducted by The Orlando Sentinel, that analyzed all killings by police from 1999 to 2002 in Central Florida. The study found that of the 428 reported killings:

30 cases followed 911 calls by family members of someone who was suicidal. In an additional 12 cases, the victim was known to be mentally ill, usually schizophrenic–these include a 15-year-old autistic boy. And a closer reading of the details of each death suggests that an additional 12 victims were severely mentally unstable–for example, one was a naked man banging on the window of the police station.

This data comports with the conclusions of the Treatment Advocacy Center, which found through informal studies that “at least half of the people shot and killed by police each year in this country have mental health problems.” The summary report concludes by arguing:

The transfer of responsibility for persons with mental illness from mental health professionals to law enforcement officers is both illogical and unfair and harms both the patients and the officers.

The report recommends that mental health agencies be assigned ultimate responsibility for providing assistance to the distressed. It also recommends the expansion of Assisted Outpatient Treatment, an authorization that allows the state to compel court-ordered mental health treatment as a condition of living in the community, after a mentally ill person has committed a crime, or caused a significant public disturbance. Five states (Connecticut, Maryland, Massachusetts, New Mexico, Tennessee) currently allow for “AOT.”

Loading more stories
wpDiscuz
2
0
Would love your thoughts, please comment.x
()
x
| Reply
Keith Vidal is the schizophrenic teen shot dead by cops in Boiling Springs Lake, North Carolina. Here's what you should know about his story and his parents' outrage.