Patriots running back LeGarrette Blount stole the show on a stage where Tom Brady has been the one-man star for many years — postseason games at Gillette Stadium.

Blount ran wild in New England’s 43-22 divisional playoff win over the Indianapolis Colts, putting on an incredible display of speed, power and elusiveness in a record-breaking performance.

Here’s the inside skinny on Blount:

1. He Began His Collegiate Career at East Mississippi Community College

Despite being a four-year starter and three-time 1,000-yard rusher, Blount was only rated a two-star recruit by Rivals.com coming out of Taylor County High School in Perry, Florida. Watch some of his high school highlights above.

Although Blount attended camp at Auburn and originally signed with the school, he failed to qualify academically. Consequently, the 6-foot, 250-pound bruiser headed to East Mississippi Community College, where he was ranked the top junior college running back prospect in the nation by Rivals.com. Blount received interest from several premier programs, but ultimately committed to Oregon in December 2007.

2. He Made Quite a Few Poor Decisions in the Past

Blount’s tenure at Oregon was marred by bad decisions both on and off the field. After a stellar first year with the Ducks, head coach Mike Bellott suspended him indefinitely in February 2009 for “failure to fulfill team obligations.” Blount skipped a number of workouts, missed team meetings and experienced trouble adjusting to big-time college football.

Blount began showing signs of progress after new head coach Chip Kelly reinstated him in the fall. However, things took a turn for the worst after Oregon lost its 2009 season opener to Boise State. After the game, Blount threw a punch at opposing linebacker Byron Hout, who taunted him during the postgame handshakes. Watch it happen below:

Blount was originally suspended for the entire 2009 season. However, he wrote an apology in the school newspaper and was ultimately reinstated in mid-November.

Less than a year later, Blount threw a punch at Titans teammate Eric Bakhtiari during an offseason practice. He was ultimately waived by Tennessee before the 2010 season.

Blount was not selected in the 2010 NFL Draft. Despite being an extremely promising talent, his stock took a huge hit after the on-the-field sucker-punching incident at Oregon. His work ethic, maturity and overall character were called into question, and many NFL teams thought those risks outweighed any potential reward.

4. He Began His NFL Career With the Buccaneers

The Tampa Bay Buccaneers ultimately chose to take a chance on Blount, who was claimed off waivers less than a week before the regular-season opener. He eventually usurped Carnell “Cadillac” Williams as the starter en route to an 1,007-yard rushing season — the most by any rookie in 2010. Blount had another solid season in 2011, but took a back seat last year when rookie Doug Martin took over the starting duties.

The Buccaneers traded Blount to the New England Patriots for Jeff Demps and a seventh-round draft pick in April 2013.

5. He Made History With Dominating Performance Vs. Colts

Blount has been one of several Patriots running backs to split the workload this season. Although he’s been competing for playing time with Stevan Ridley, Shane Vereen and Brandon Bolden for most of the season, the 27-year-old has performed well whenever his number has been called.

As it turned out, his number was called a lot in Saturday’s divisional playoff game against the Indianapolis Colts. Blount beat and battered the Colts defense, gashing his outmatched opponent for 24 carries, 166 yards and four scores, including a 73-yard gallop to paydirt in the fourth quarter (see GIF above).

Watch him talk about his record-breaking performance below: 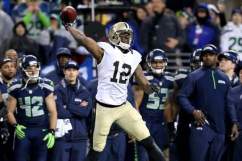