It’s a game that always had injury like this. The unlucky party was 49ers LB NaVorro Bowman who suffered a gruesome looking knee collapse under a pile of bodies in the fourth quarter. Bowman had to be removed from the game because of it.

Then, for some reason, the play wasn’t reviewed? I guess the officials though Bowman’s injury collapsed under the sound of Seattle’s crowd? 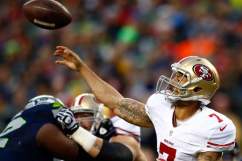