Oklahoma quarterback Trevor Knight powered the Sooners to a 45-31 victory over Alabama in the Sugar Bowl on Thursday. The redshirt freshman completed 32 of 44 passes for 348 yards, four touchdowns and one interception, outdueling one of the nation’s most experienced and winningest quarterbacks in A.J. McCarron.

1. He Is a Four-Star Recruit from San Antonio

Knight attended Ronald Reagan High School in San Antonio, Texas, where he threw 27 touchdowns and passed for more than 2,000 yards as a senior. Rivals.com ranked him as the No. 6 quarterback prospect in the nation.

Check out his high school highlight tape below:

Knight was redshirted in his true freshman year to provide him with an extra year of eligibility. He was named Oklahoma’s starting quarterback in August, but was forced to miss considerable time this season with sprained knee ligaments, ESPN reported.

3. He Made His 5th Career Start in the Sugar Bowl

Although he played like a seasoned veteran, Thursday’s Sugar Bowl was just Knight’s fifth career start. In fact, Sooners head coach Bob Stoops declined to name a starting quarterback entering the game. Junior Blake Bell, who finished with a 6-2 mark in eight starts, replaced a struggling Knight and led Oklahoma to a come-from-behind 33-24 win against Oklahoma State in the regular-season finale.

Alabama senior quarterback A.J. McCarron hoped to cap off an illustrious collegiate career with a victory in the Sugar Bowl. But McCarron, who won three national championships with the Tide, didn’t get the storybook ending he was looking for. Instead, his final play in the college ranks was a sack, strip and fumble returned for a touchdown by Oklahoma’s Geneo Grissom.

Rather than raving over McCarron’s outstanding career, college football pundits and fans are talking about the newcomer Trevor Knight, who lit up a Crimson Tide defense that was allowing less than two touchdowns a game.

I can admit I'm pretty lucky to be dating such an incredible guy! pic.twitter.com/7KF1nYWHAa

Trevor has a twin brother, Connor, who plays tight end for the Sooners. They are not identical twins — Connor is taller and heavier. Trevor earned a scholarship and became a household name as an extremely highly touted recruit in Sooners country. The more anonymous Connor, who earned a roster spot as a walk-on, plays primarily on special teams. 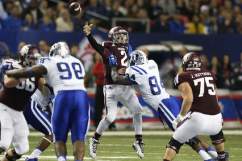