The Denver Broncos and Seattle Seahawks will face off in Super Bowl XLVIII at MetLife Stadium in East Rutherford, New Jersey on Sunday, February 2.

The game presents an interesting matchup between the two quarterbacks, Peyton Manning and Russell Wilson.

Although both have had career-defining seasons and share great respect for one another, the similarities between Manning and Wilson just about end there.

Here’s a glance at Manning vs. Wilson by the numbers:

Take a look below to see the best highlights from both Manning and Wilson this season:

Manning is a savvy veteran and future Hall of Famer with a championship pedigree. On the other hand, Wilson — in just his second NFL season — is looking to make his mark as one of the elite quarterbacks in the league.

The nearly 13-year age difference between Manning and Wilson is the largest between starting quarterbacks in Super Bowl history.

This video really puts it into perspective:

Wilson actually attended Peyton Manning’s passing academy as a 10th grader, and considers the Broncos signal-caller one of his role models.

It’ll be great to go against Peyton Manning. Obviously, it’s not me versus him, but he’s a guy that I have so much respect for. All of the amazing things he’s done over his career, he’s built this unbelievable legacy, and he’s one of the best — if not the best — quarterbacks to ever play the game.”

“One day I want to be like him in terms of the way he thinks. He’s just a master of the game. I’m working to get there; I’m on a constant quest for knowledge. I have memories of being in 10th grade and going to his passing academy and learning from him. That was one of the better experiences of my life.”

Check out the clip below to see Wilson talk about matching up against Manning in the Super Bowl:

Manning, the son of former NFL great Archie Manning and brother of New York Giants quarterback Eli Manning, was a nationally recognized prospect in high school. He went on to become the first overall pick in the 1998 draft.

Meanwhile, Wilson — the sixth quarterback taken in the 2012 draft — was off most people’s radars heading into his rookie season.

Watch below to relive the Seahawks’ selection of Wilson in the third round of the 2012 draft. Jon Gruden was raving over him at the time.

Peyton Manning and Russell Wilson serve different roles on their respective teams. While Manning is asked to generate most of his team’s offense with his arm, Wilson fills more of the game manager role.

Manning passed for 5,477 yards and 55 touchdowns this year — both league records. He has a bevy of weapons at his disposal in the passing game, namely Wes Welker, Eric Decker, Demaryius Thomas and Julius Thomas.

Take a look back at Manning’s record-breaking season below:

Aided by the league’s stoutest defense and a strong ground attack led by bruising back Marshawn Lynch, the Seahawks’ formula for success doesn’t require Wilson — who threw for just 3,357 yards and 26 touchdowns this season — to pass as much.

Although their playing styles are markedly different, neither quarterback is mistake-prone. Manning threw 10 interceptions (659 attempts) this season while Wilson tossed just nine (407 attempts).

Conversely, at 5-foot-11 and 206 pounds, Wilson is much shorter and lighter than most NFL quarterbacks. Although he had an extremely successful collegiate career at NC State and Wisconsin, many scouts wrote him off due to his lack of traditional size.

But instead of allowing it to discourage him, Wilson used the reservations about his size as motivation to become an even better quarterback.

I kind of wanted to go against the odds. I was a 5-11 quarterback, I had big hands, I could run. I was not going to let being a 5-11 quarterback stop me. My height doesn’t define my skill set and my intelligence for the game.”

One thing Wilson can do more efficiently than Manning is use his feet. The 25-year-old Richmond, Virginia, native ran for 539 yards this season while his much more stationary adversary actually finished in the red, totalling -31 yards on the ground in 2013.

If the Seahawks ultimately prevail against the Broncos in Super Bowl XLVIII, Wilson would own the highest regular-season rushing total registered by a Super Bowl-winning quarterback in history. 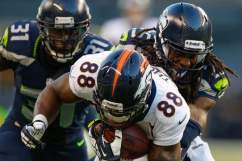 Loading more stories
wpDiscuz
0
0
Would love your thoughts, please comment.x
()
x
| Reply
The Broncos and Seahawks will square off on Super Bowl Sunday, serving up a compelling quarterback matchup between Peyton Manning and Russell Wilson.