South Koreans burn Kim Jong-Un in effigy as protest against his rule. (Getty)

According to NBC, a North Korean newspaper is reporting that Jang Song Thaek, Kim Jong-Un’s Uncle, was executed by his nephew by being eaten alive by a pack of starved dogs.

The newspaper claims that the formerly second-in-command of Kim Jong-Un’s government, who was found guilty and executed last month for “attempting to overthrow the state,” was stripped naked before being thrown into a cage. The dogs were allegedly starved for days before being allowed to consume Thaek and his five closest advisors. 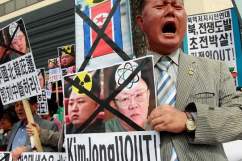