Late Monday night the legendary folk singer-songwriter and activist died in his home in Beacon, New York. He was 94 years old and his son told the AP in the obituary above, he was chopping wood up until a week ago.

Here is what you need to know about the American legend Pete Seeger:

The other songs Seeger was known for were traditional American Labor songs like “Casey Jones,” or “Banks of Marble.” Not to mention the popular protest songs like “We Shall Overcome” and “Down By the Riverside.” Seeger was often called an encyclopedia of American music.

2. He Was Blacklisted After Being in the Communist Party

On August 18, 1955, on the same day as Arthur Miller’s appearance, Seeger sat before the House Committee of Un-American Activities and asked about his involvement with the Communist Party, which he had been a member of during the 1940s. His response will go down in history:

I am not going to answer any questions as to my association, my philosophical or religious beliefs or my political beliefs, or how I voted in any election, or any of these private affairs. I think these are very improper questions for any American to be asked, especially under such compulsion as this. I would be very glad to tell you my life if you want to hear of it.

For giving only that response, and only that response, to all of the committee’s questions, Seeger was sentenced to one year in prison for contempt of congress. You can read the full transcript of the hearing here, or listen to an interview about it above.

3. He Was Active in the Civil Rights Movement

Preaching racial tolerance from a young age, Seeger became active in the civil rights movement, providing songs, and historical context, to the movement. Listen above as Seeger talks about the history of the song “We Shall Overcome” and its long history with civil rights and labor campaigning, along with his own place in that history.

Seeger always said that he was inspired by Dr. Martin Luther King Jr. and other leaders of the era for their perseverance and dedication to non-vionce.

During the era, Seeger was also a dedicated critic of the war in Vietnam and the atomic bomb.

4. He Recorded Many Songs for Children

Pete Seeger always believed that children were America’s most important recourse and spent much of his life singing and recording folk songs for children. Classic American standards like “This Land is Your Land,” and “This Little Light,” were always sung sing-along style for children in the audience.

5. He Played at Occupy Wall Street at the Age of 92

In keeping with his lifetime of activism again poor working conditions and income inequality, at the age of 92, Pete Seeger joined the Occupy Wall Street movement in New York City. Playing from outside Columbus Circle he and Arolo Guthrie led the crowd in a rendition of “We Shall Overcome.” 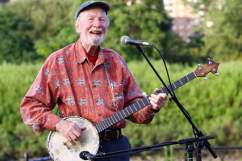 R.I.P. Pete Seeger: All the Pictures You Need to See