Lauren Tannehill, the model wife of Miami Dolphins quarterback Ryan Tannehill, made headlines this week for leaving an AR-15 rifle in the back seat of a rental car, CBS Sports reported on Thursday.

Here’s what you need to know about Mrs. Tannehill:

1. The Rifle Was Discovered By the Next Rental Car Customer

Tannehill, 26, rented a 2013 Nissan Rogue from E-Z Rent-A-Car in Fort Lauderdale on January 4, NBC Miami reported. She returned roughly two hours later to exchange the Nissan for a different vehicle — but forgot to remove her rifle from the trunk.

A New York woman, Judith Fleissig, discovered the AR-15 in the back seat of the rental car and quickly turned it over to authorities.

We got out of the car, we were kind of freaked out,” Judith Fleissig told the South Florida Sun Sentinel. “I didn’t want to touch it.”

Watch the story below:

2. It’s Unclear Why She Was Carrying the Rifle

So far, it’s not clear why Tannehill was carrying a high-powered rifle. However, it’s not against the law.

Though dangerous if it would have landed in the wrong hands, it’s not criminal,” Broward sheriff’s spokeswoman Keyla Concepción told the Sun Sentinel. “They simply forgot it.”

However, Tannehill has posted pictures on Twitter and Instagram showing her and her husband shooting rifles together (see above).

It’s also not currently known if the weapon, valued at around $2,000, was returned to the Tannehills.

According to the Miami Herald, the Dolphins declined to comment on the bizarre situation, saying “The Tannehills view this as a personal matter.”

Lauren Tannehill entered the national spotlight in 2012 when she was featured alongside her husband Ryan on HBO’s reality sports documentary “Hard Knocks.” The couple met at Texas A&M, where Ryan played quarterback and Lauren was a cheerleader.

They were married in January 2012.

5. She’s an Aspiring Model and Actress

Tannehill is a nurse and aspiring model and actress, according to the Daily Mail.

Watch the slideshow below:

Lauren Tannehill, wife of Miami Dolphins QB Ryan TannehillPlease watch: "MAGIC For The Uncle Louie Show " https://www.youtube.com/watch?v=wYbNNoJxSCA –~– Ryan Tannehill was the one who recently completed his journey to the NFL, but it was his wife Lauren Tannehill who had people talking.2012-04-28T20:21:25.000Z 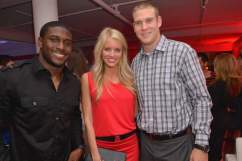